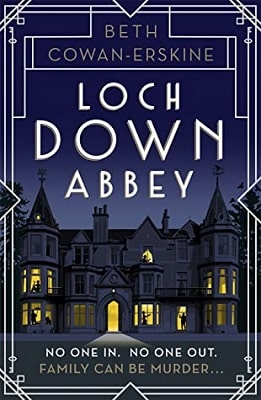 This premier novel by Beth Cowen-Erskine is more like a Russian nesting doll than a straight mystery. It’s a mystery, as in who killed the Lord of the Manor, wrapped inside a quirky family and their individual approaches to life, glazed with some romantic and relational issues. To say the Inverkillen family is eccentric is most likely an understatement, but that’s one of the things that makes the book so entertaining.

The Inverkillen estate consists of the abbey, a castle made up of 125 rooms, all filled with Scottish memorabilia accumulated over the centuries and decorated EVERYWHERE with the family tartan, 5000 acres of land along a river, a working distillery which makes the worst whiskey in Scotland, a carriage house where the dowager lives, numerous outbuildings, and a successful salmon business. Residents of the castle include the children and grandchildren of the dowager countess and a ward she brought home from an orphanage. One granddaughter, Annabella, married a French Marquis and moved to France but is back for her annual visit, bringing her children with her.

The estate also has a full complement of servants who are managed by Mrs. MacBain, head housekeeper with the aid of the butler Mr. Hudson, the cook, Mrs. Burnside, the chauffeur Mr. Lockridge, and Valet Mr. Mackay. The servants seem to be more in tune with reality and manage to keep the estate functioning in spite of it’s full complement of off-kilter residents. There are also   numerous other characters who are either currently living at the estate or who travel back and forth in their professional capacities. Cowen-Erskine has provided a list of characters at the beginning of the book as they are numerous and some readers may find it difficult to keep them all straight. It might be helpful to bookmark the cast of characters’ page to help keep their placement and relationships clear.

There is a great deal of tension between family members that is evident from the beginning of the book. The primary goal for most of them is living the life of an aristocrat, whatever that may entail. There are numerous points of jealousy, envy, and resentment that seem to be exacerbated by their proximity to one another and the rigidity of the household routine. Above all, their behavior is consistent, down to the minute throughout every day. When Lord Inverkillen doesn’t appear for dinner it is so out of character most of the family go into shock. An initial search for him is fruitless and it isn’t until the next morning they discover his body by the weir where it appears he was fishing.

Lord Inverkillen’s death is determined to have been an accident by the local police, however, Mrs. MacBain is not sure. Numerous hints dropped throughout the story indicate she needs to discover the certain truth about his death before it is too late. These hints are sprinkled throughout the story, but no further information is given as to why she feels this need. Some readers may reach the solution to this puzzle as Mrs. MacBain uncovers the truth, but figuring that out will not spoil the ending of the book. However, this review will not include that information which might spoil the ending for some.

How the family spends their day is told in varying passages that serve as a humorous look at the aristocracy in the early 1900’s. As the servants run everywhere, trying to meet the demands of the family, they frequently wonder what it is the family does all day? Because of a mysterious illness that has invaded Scotland, many of the servants are sickened and must be removed from the house to recover. As the crisis grows, the staff become increasingly taxed with trying to get everything done until they reach a point that change will have to occur. Scenes involving having the family make their own beds, light their own fires, and, horror of horrors, come to the dining room for breakfast instead of having a tray delivered provide a humorous look at how the idle rich came to be called the idle rich.

There is a second strong storyline involving the future of the family. The countess’s husband failed to manage the estate reasonably, and his son has done no better. At the same time, the death of the current Lord Inverkillen is discovered, the reality of imminent bankruptcy of the family is also revealed. The money problems they had been facing have become insurmountable with death duties now due and difficult decisions must be made if they are going to successfully pay the duties owed and still have roofs over their heads.

While the end of the book is satisfying, there are still some humorous outcomes to be revealed in the epilogue so don’t fail to read that as well. This is a fun book to read, it’s light-hearted and provides good respite from books that are filled with tension and suspense. It might be the perfect book for when you are wanting to read something that will give you a break from your typical mystery fare.

My thanks to Hodder Paperbacks Hodder & Stoughton for providing me with an advanced copy for review. The opinions stated here are entirely my own.