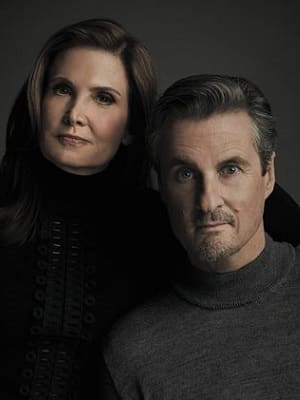 L.R. Dorn is the pseudonym for Matt Dorff and Suzanne Dunn. Matt Dorff is a Los Angeles native and graduate of the USC School of Cinematic Arts, has written, produced, and/or directed over 60 hours of dramatic television (CBS, NBC, ABC, Showtime, HBO and elsewhere). He lives in Los Angeles. Suzanne Dunn is a two-time Emmy Award winner, has written two screenplays produced and aired on Lifetime Television and Ion Television. She grew up in Bucks County, Pennsylvania, and earned degrees from Penn State and the University of Chicago. 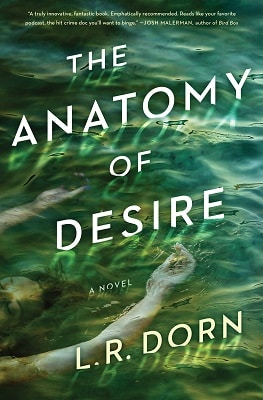 An interview with LR Dorn about their debut THE ANATOMY OF DESIRE, out from William Morrow, May 11, 2021.

Q. Your debut novel has its roots in both a fictional story and a true crime?

L.R.: Yes, we (L.R. Dorn is the pen name for husband-and-wife coauthors) were looking for a book we could update and reformat into a transcript-style novel that would make it feel like the streaming docuseries we just watched last night. We wanted to play with the traditional form of the novel and mix in these popular new platforms like podcasts, audiobooks, and docuseries. Theodore Dreiser’s An American Tragedy was a huge (800-plus pages) and hugely important book in its time and spawned decades of adaptations across multiple mediums. Few people remember it today, but in the first half of the 20th century it was the American equivalent of Dostoyevsky’s Crime and Punishment.

Q. A Place in the Sun, the Academy Award-winning 1950s movie starring Montgomery Clift and Elizabeth Taylor, was an adaptation of An American Tragedy, wasn’t it?

L.R: It was. Initially we were more familiar with that movie than the book. So we went back and read An American Tragedy and saw that it had what we were looking for: a strong crime narrative, a powerful courtroom drama, and themes that are as relevant today as they were a hundred years ago.

L.R.: Economic inequality, the gap between the haves and have-nots, political corruption, religion, small-town versus big-city, the justice system, and the American Dream as an aspiration for status, money, and sex. The essence of the American Dream hasn’t changed since the 1920s; what’s changed is technology and media. Dreiser’s main character, Clyde Griffiths, is a young man who develops an overwhelming desire for the good life, for material success and the privileges that accompany it. When a discarded girlfriend from his own lower economic class stands in the way of him attaining his dreams, he decides to kill her.

Q. And Dreiser based An American Tragedy on a true crime?

L.R.: Yes, this was where our research took a surprising turn. Dreiser’s book is substantially based on a 1906 drowning investigation and murder trial that took place in the lakes region of upstate New York. He wasn’t merely inspired by the true crime and the people involved, he took the setting, the details of the killing, and the actual characters the newspapers were reporting on and fashioned what we might today call a nonfiction novel. He fictionalized the scenes and dialogue for the most part, but the outline of the true story is essentially identical to the outline of An American Tragedy.

Q. Tell me more about the true crime.

L.R.: Chester Gillette came from a family of Christian missionaries who were affiliated with the original Salvation Army. These were 19th century evangelicals who shunned worldly possessions. Chester wasn’t keen on the intentional poverty part of his upbringing, and approached a wealthy uncle for a job in his clothing factory, the Gillette Skirt Company. He started an affair with a working-class assembly-line employee named Grace Brown and got her pregnant. About the same time Chester began romancing a socialite named Harriet Benedict from a moneyed New York family. Grace wouldn’t consent to an abortion and demanded he marry her, so Chester had a problem. He took her up to a lake in the woods on the pretense he was going to propose to her. He rented a boat, rowed her out into the deep water, then whacked her in the face with a tennis racket and pushed her into the lake knowing she couldn’t swim.

Q. So the crime story and trial were covered extensively in the big media of the time, newspapers and magazines.

L.R.: “Girl Drowned, Escort Missing” was the first newspaper headline and it took off from there. It became the original “murder trial of the decade” in 20th century America. It had everything. A handsome, charming, man-on-the-rise suspect. A working girl victim, four months pregnant. A love triangle with a wealthy socialite that set off a scandal among New York’s upper-class. Chester pled not guilty and vigorously proclaimed his innocence all the way through. The prosecution had Grace Brown’s love letters to Chester and they were read aloud in court. It was one of those cases that has a gripping, elemental “did he, or didn’t he?” mystery at the center of it. All across the country, the public got to read the daily trial reporting and debate both sides along with the jury.

Q. What was the outcome of the trial?

L.R.: The jury found Chester Gillette guilty of first-degree murder and sentenced him to die in the electric chair. You had a poor woman murdered, a rich woman embroiled in scandal, and young man who went to his death declaring he was innocent. Chester Gillette established the American archetype of the youth who raises himself out of poverty, achieves success, then falls victim to his own ambitions and suffers the ultimate consequence. Sam Sheppard, Jeffrey MacDonald, OJ Simpson, and Scott Petersen are all variations of the social antihero first represented by Chester Gillette. He was the O.G. alpha male accused of murdering a female lover and triggering a media circus around the pursuit of justice for the tragic victim of a man’s intentional betrayal and ruthless ambition.

Q. How did you conceive the update?

L.R.: The key change we made was to take the male Chester Gillette/Clyde Griffiths and switch genders. It’s more interesting to us as a woman’s story. Our of-the-moment Cleo Ray strives for success and status by becoming a social media fitness influencer. We transformed the Gillette Skirt Company into YouTube, Instagram, and TikTok. The American Dream is alive and well, like so much else it’s just shifted online.