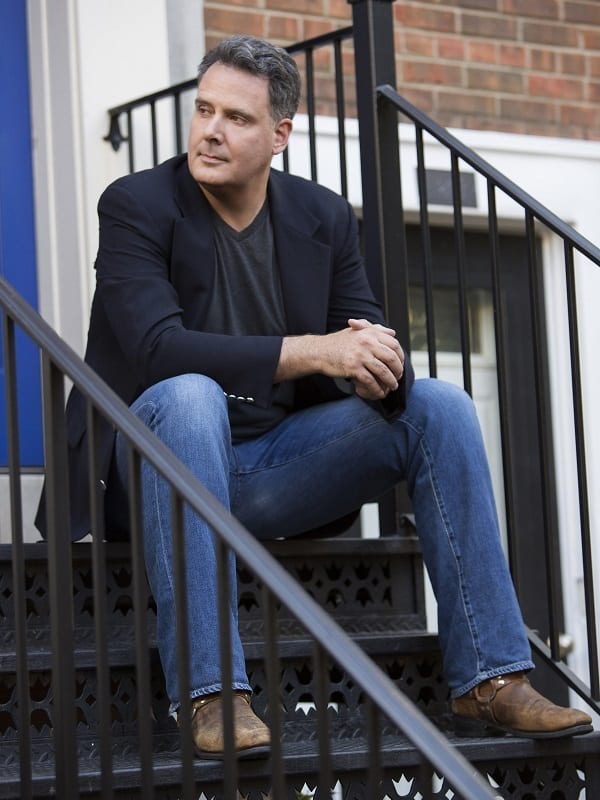 Matthew FitzSimmons is the author of the bestselling Gibson Vaughn series (The Short Drop, Poisonfeather, Cold Harbor, Debris Line, Origami Man). Born in Illinois and raised in London, England, he now lives in Washington, D.C, where he taught high school English literature and theater for over a decade.

Q. Constance, a terrifying thriller about human cloning, is coming September 1. What inspired the story?

Matthew: I didn’t set out to write a science fiction thriller. Constance began from a game I like to play with myself where I take a familiar trope or story and try to twist it into something I haven’t seen before. One night, I began toying with the murder mystery, one of the oldest stories we tell. Well, what if someone had to investigate their own murder? How could someone be both detective and victim? Had that been done? I could think of ghost stories along those lines, but for obvious reasons in non-supernatural stories it was paradoxical. So how? I got into bed having all but given up when the idea of a clone investigating the murder of their original popped into my head. I executed a flawless, cinematic sit-bolt-upright-in-bed move and spent the rest of the night at my computer jotting down notes. I even wrote what eventually became chapter four of Constance. That was five years ago. I’ve finished four books in the interim, and I can’t quite believe it is finally going to see the light of day.

Matthew: When I said that, what I was trying to do was give myself permission to stretch as writer. To resist the urge to play it safe by only writing what I already knew. When I took on Constance, it wasn’t so much what I wanted to know as what I needed to learn. I knew nothing about cloning, and next to nothing about quantum computing or the progress that’s been made in mapping the brain. The research was fascinating, and people are remarkably generous with their time if you tell them you’re writing a novel. Along the way, I got to talk to neuroscientists, engineers, and computer designers. I think that it gave the worldbuilding of my hypothetical future, a grounded, believable feel. At least that is my hope.

Q. You’re most famous for your Gibson Vaughn series. Is there more coming in that?

Matthew: I’m proud of the arc that the series take. When I finished Origami Man, it felt like the strange story of Gibson Vaughn and motley band had reached a natural conclusion. Recently, I’ve been working with a fellow in Los Angeles mapping out a potential television series. It’s been really nice to reconnect with the series. Like visiting with friends I’d lost touch with. I find that I have ideas for new directions to take the four central characters. So while there is nothing planned in the near future for a sixth book, I would no longer say never.

Q. What did you learn in your decade of teaching high school that makes you a better writer?

Matthew: I learned the value of rereads. The cliched advice for writers is to read as widely and prolifically as possible. And while that is certainly true, teaching required me to read the books on my curriculum over and over, multiple times a year. That meant over a twelve-year career I read books such as Toni Morison’s Song of Solomon, James Baldwin’s Notes of a Native Son, Truman Capote’s In Cold Blood dozens and dozens of times. The lessons I learned from studying these masters of their craft in depth are the backbone of my own writing. It taught me that reading a great book once only scratches the surface of understanding that book.

Q. In your bio, you mention that you nearly started a riot in China and had to write a sort of apology. What’s the story there?

Matthew: The short version is that in sports, no one ever catches the instigator, only the chump who overreacts and takes the blame. I was that chump.

I was living in Nanjing, China in the mid-90s. The country was just beginning to open up to the west. At 6’6”, I turned out to be a pretty startling introduction to white people for many of the Chinese whom I encountered. I was the object of much curiosity, often followed in the streets, touched, photographed.

The country was also beginning to fall in love with soccer, but the sport was still very new to them. Nanjing University had an intramural league made up of teams from the individual schools. Generously, the foreign students were invited to field a team. A team that was comprised almost exclusively of Germans, French, Italians, Brits…and me, because they were a man short, and I had played soccer growing up in England (but not once in all the years since).

We were very, very good. Correction, the team was very, very good, and I stood in defense with very little to do as, week in and week out, our team decimated one Chinese team after another. Word quickly got around campus. Larger and larger crowds turned up to see the Laowai play. None of which went over especially well with the Chinese teams who did not enjoying losing face in front of an audience of their friends and peers. The games began to get heated and then they got chippy. Our captain made the executive decision to keep the final score respectful. I don’t know if that helped or hurt.

In the first round, we quickly went up 4-0, which was our agreed upon time to put on the brakes and kill off the game. The Chinese broke forward, but their shot sailed wide of the goal. Our goalie went to collect the ball, which had rolled out onto the track. The players trotted back to await the goal kick. Everyone looked away, apart from me. As the Chinese striker trotted past my teammate on defense – a burly Englishman from Manchester who talked about his fights the way other men talked about their first loves – he kicked the Englishman hard in the calf and kept going as though nothing had happened. The Englishman had no such guile. He turned bright red, shoved the Chinese striker hard in the chest, and began what they call in Manchester, a “polite conversation.” I believe I was the only person who saw the initial kick but now everyone was looking our way. And what they saw was me, a 6’6” foreigner race over angrily to the 5’5” Chinese player. What they saw was me ram him with my chest and launched him, like Sputnik, into a low earth orbit.

I was surrounded by the opposition team, and in the shortsighted righteousness that is unique to large, twenty-five-year-old men, I beckoned them to…I believe the phrase is, “bring it on.” Thankfully at that moment, my German team captain raced up, grabbed my arm, and yelled, “Run!” We ran.

Once the smoke cleared on our near international incident, the University decided that as the instigator and troublemaker, I should write a Peiping – a letter of self-criticism. In Chinese culture, this is considered a great humiliation and loss of face. However, as an Irish-American, self-criticism is considered a birthright. I happily wrote the letter and signed it. The University said it was sorry to have been so harsh with me but hoped that I had learned my lesson. I assured them that I had.

Matthew: To my own surprise, I am writing a companion to Constance. Constance was always intended as a standalone novel, but then one day in January I took a shower. Not that I don’t usually take showers, but on this particular day I entered the shower without an idea and by the time I toweled off I had the entire arc of the story. It was one of my better showers if I’m being completely honest. It will be called Chance, and I hope to have it finished by the end of the year. Wish me luck! 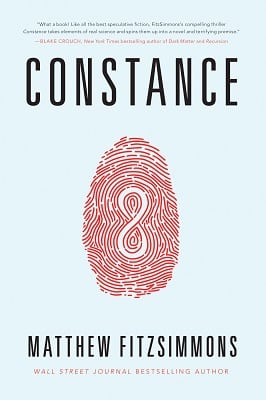 In the near future, advances in medicine and quantum computing make human cloning a reality. For the wealthy, cheating death is the ultimate luxury. To anticloning militants, it’s an abomination against nature. For young Constance “Con” D’Arcy, who was gifted her own clone by her late aunt, it’s terrifying.

After a routine monthly upload of her consciousness—stored for that inevitable transition—something goes wrong. When Con wakes up in the clinic, it’s eighteen months later. Her recent memories are missing. Her original, she’s told, is dead. If that’s true, what does that make her?

The secrets of Con’s disorienting new life are buried deep. So are those of how and why she died. To uncover the truth, Con is retracing the last days she can recall, crossing paths with a detective who’s just as curious. On the run, she needs someone she can trust. Because only one thing has become clear: Con is being marked for murder—all over again.