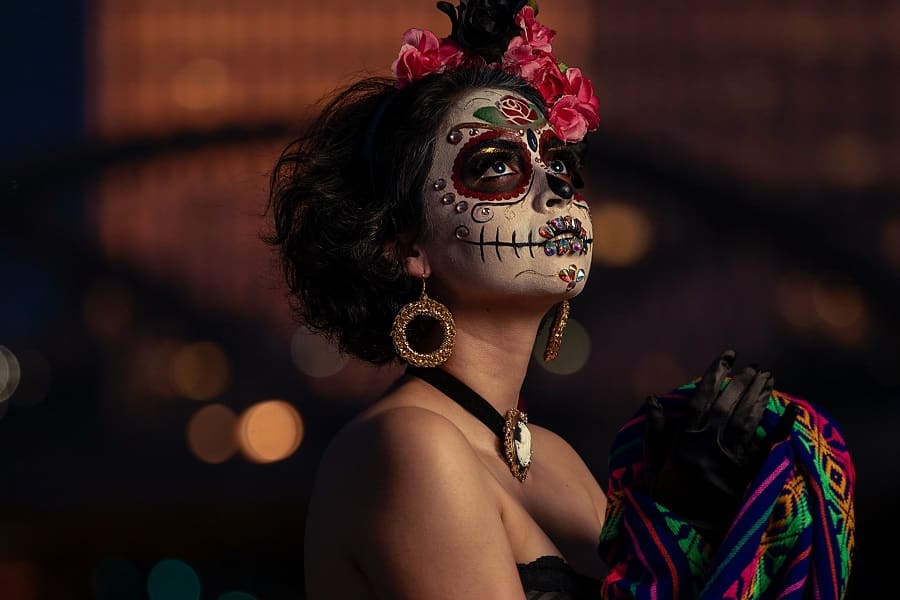 Why is Mexico a perfect setting for the Mystery, Suspense, and Thriller genres? To answer this, we must begin by understanding what defines Mexico. Would a country that has experienced conflict, sociological dislocations, and fusions with a history measurable in millennia have the potential for the subject genres to be ironed into its fabric, culture, and people? Mexico resoundingly qualifies especially when it comes to myths and legends which provide a trove of material.

Take the Day of the Dead celebration for example, which is incorporated into the Aztec calendar.  It began 2500 to 3000 years ago as a ritual celebrating the deaths of ancestors. The month long celebration is dedicated to a god named “Lady of the Dead” or Catrina. Descendants visit cemeteries to commune with departed souls and use earthly possessions to encourage visitations.

Just take this one cultural tradition. Could a mystery, suspense, or thriller novel be spun from it? Absolutely. “It isn’t right,” John hissed angrily to his buddies at the bar. “Rick is such an obnoxious, conceited bastard! Everything goes his way and he rubs his success in our faces. How does he always make the right moves? It’s like he has all the answers. Starting tonight, I’m gonna find out why! I don’t care if people gossip he’s some sort of spirit cultist nut job who sleeps in cemeteries. I think he started that rumor just to scare us off.”

Morbid ghost legends are also alive and well in Mexico. “La Llorona” or the “The Weeping Woman” is about a woman who killed her children to attract the love of a man and subsequently killed herself after he rejected her. She was doomed to wander the earth for eternity searching for her children. The details of the tale vary which open up many literary opportunities involving ghosts or regular, corporeal folks, who tread down that horrific path.

I especially like the hitchhiker ghost legend. On a given day each year a spirit appears as a beautiful human woman and gives her address to the driver. Later, when he goes to find her, he’s informed that she’s dead. Sounds like a great pitch for a novel, doesn’t it? Why him? Why her? Why there? Does she have a message that will affect his life? What does the person at the address really know of the ghost and her history? The Aztec’s and Mayan’s also have volumes of spirit beliefs which could easily be modernized.

While on the topic of ancient beliefs, myths, and traditions, there is also the conversation and controversy about alien visitations of the outer space type depicted on artifacts found in Teotihuacán (0-500AD) and Chichén Itzá (600-1200AD). I’ve been there and can testify that, surrounded by the ruins, it’s easy to imagine outer worldly goings on. Satellite lidar scans have also recently discovered the enormity of the city of Angamuco which was built by the Purépecha around 900AD. It remains buried under the canopy of the Mexican jungle and a 1,000 years of growth. Ancient hieroglyphs and other writings also suggest extraterrestrial intervention stories worthy of George Lucas and Steven Spielberg. It doesn’t matter that these original stories are thousands of years old. In fact, this makes the whole idea of them even more intriguing. Thriller and mystery fans can certainly rejoice at this potential for both ancient and modern day adaptations. The wonders and depth of Mexican myth never cease to amaze.

Moving into the twenty-first century, for better or worse, thriller/crime stories set in Mexico are popular. Some of these have to do with the cartels and crime in general. There is also migration from Central America and as with any mass migration of people, mysteries, suspense, and thrillers are only waiting for the reimagining of an actual event or the creation of a plot born from the gestalt of events.

Sand castle kingdoms we also call cities and towns abound in Mexico. Some are in the mountains. Some are in the desert. Some are on the ocean. Some are tourist oriented while others are definitely not. In the latter, it’s still possible to find what I call chicken buses, careening phantom like along pot holed and dusty streets, especially at night. I’ve been on those buses. It would be fun to craft a mystery around the one that picked me up in the predawn glow, Christmas lights twinkling on the grill, no passengers. “I was the first one on,” John said quietly. The campfire crackled and sparked as he began recounting the experience that led him into a world that challenged all the science he knew. “The driver, his face, dark, long and wrinkled, merely nodded as I dropped my peso into the cardboard box. Then he looked at me. What really struck me were his eyes. The sharp eyes of a younger man who missed nothing.”

For many story creators, the vibe and physical characteristics of a location play heavily into what ultimately ends on the page or screen. Today, one can virtually “travel” to anywhere, say, by watching a live cam of a market square in a city. Mexico abounds with them. But nothing beats actually being there and sitting at a café for hours with notebook or computer, just letting the totality sink in. What does the energy in the square feel like—calm, expectant, chaotic?  How does the water look as it streams onto and off the statuary of the central fountain? What are people doing at the fountain? What mood is cast from the sun and shadow at that time of day?  What is the ambient sound? “Carlos hesitates, knowing he’ll only have moments after wading into the fountain pool before the police descend upon him. But there it was, so close. A dark blue satchel submerged in two feet of shimmering water just below the feet of Saint Vincent. Exactly where her note said it would be. ‘Happy to lend a hand,’ it said. Heart pounding, he glanced at the tour group gathering near him and then at the police.”

Mexico has many such great and varied cities, each a microcosm of humanity that could provide the creative spark and layers of reality needed for a great story: Mexico City, population around 9 million, a cosmopolitan free for all. Guadalajara, population around 2 million, a more colonial flair. Guanajuato, population around 200,000, mining, narrow streets, and tunnels. Oaxaca, population around 350,000, rough terrain, renowned culinary scene. Cozumel, a small island with around 85,000 people, everything ocean. Puerto Vallarta and Acapulco, population 390,000 and 690,000 respectively. Ocean front, dining, night life, expats, and high energy. Of course, the available cast of villains, outcasts, opportunists, adventurers, victims, and heroes is legion.

What do modern writers and film producers have to say about finding inspiration in Mexico? Firstly, suspense, mystery and thrillers tend to slant towards the dark side of narrative. Oh, let’s just say it, they bathe in the dark side! I certainly don’t want to portray Mexico this way because it is really a complex stew where worlds collide—culture, art, sophistication, depravity, crime, peace, fulfillment, humor, love, and sadness all simmering together in a big paella. It has been conveyed to me by writers and residents that a strong sense of humorous irony is necessary to survive and flourish here, as well as a watchful eye. Maybe the origin of the Virgin of Guadeloupe sums up this attitude perfectly. Urban legend has it that the Spanish created the detailed account following their conquest in order to appease the indigenous population. The short story is that the Virgin Mary first spoke to Juan Diego on the morning of December 9, 1531. She asked that a church be erected in her honor at that place (Villa de Guadeloupe). On Dec 26, the first miracle was performed after a native was accidently shot through the neck by a stray arrow during a performance in honor of the Virgin (dark and ironic humor for sure). Brought before the Virgin’s image, the arrow was removed and he recovered. In the 1800s, Spaniards born there came to believe the Virgin of Guadeloupe legitimized their indigenous Mexican origins and justified their armed rebellion against Spain. An explosive outcome unforeseen in 1531 and typically Mexican.

Here are some Mexican writers you might want to look up: Elmer Mendoza, Paco Igando Taibo II, and Jose Salvador Ruiz. They all write from the environment surrounding them and incorporate what inspires into their stories. Carmen Amato is another, amongst many, who is American and sets her novels in Mexico. Paul Theroux’s “On the Plain of Snakes” is a great source for a behind the scenes look at Mexico. One can take from his writings that Mexico is kaleidoscopic, composed of so many fragments that it defies the sweeping definition. Perhaps this is the sweeping definition.

In conclusion, when reading novels set in Mexico, see if you can find these attributes buried between the lines or right on the surface: Fragile society, ironic humor about death and life, absence of law, absence of government, the hustle, the struggle to survive, generosity of spirit, loyalty, a magical land, beautiful and dark contrast and paradox, deep cultural linkages, chaos, benevolence, religion, revenge, and activism. And the abundant occurrence of things that should work but don’t.

So why is Mexico a perfect setting for the Mystery, Suspense and Thriller genres? Anything can happen there, and usually does.

Michael Krozer is a freelance writer, novelist, and filmmaker. He travels widely and blends the locations and people he encounters into narratives that celebrate and explore the human condition. His latest novels are “87 Hours in Mexico” which follows the fateful choices made by an American rock band, and “Inversion 1 – Looking Through Mirrors” about a courageous woman determined to conquer her fear after having lost everything. Both are available through Amazon. 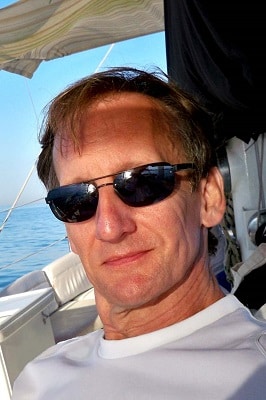