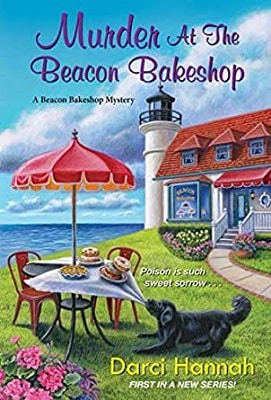 Coffee and donuts and murder, oh my! Lindsey Bakewell is hoping that her decision to buy an old lighthouse and open a bakeshop wasn’t a bad one after two unwanted guests from her past invade the grand opening festivities. When one of these guests dies a sudden death, Lindsey fears she will lose it all in Murder at the Beacon Bakeshop.

After catching her fiancé and celebrity chef in the act of cheating with his pastry chef, Lindsey Bakewell was ready for a change in the most urgent way. On a whim, she buys an old lighthouse online…in Beacon Harbor, Michigan.

Leaving a successful career on Wall Street to follow her dream of owning a bakeshop might sound strange to most, but baking is in her blood as her grandparents once owned a bakeshop in this very town. Surely she can make a-go of it herself.

Making friends with her attractive neighbor Rory Campbell may be second best to readying the bakeshop to open. His tale of Captain Willy Riggs haunting the lighthouse gives Lindsey a fright, but she continues on with her plan despite the fear.

Lindsey’s venture is met by protests from a local activist who does not like what she is doing and a surprise pop up visit during the grand opening from Jeffrey Plank, her ex-fiancé, and his girlfriend Mia Wong sends her reeling. When Mia ends up dead at the bakeshop, Lindsey becomes the prime suspect in the murder.

With the bakeshop shut down and roped off as a crime scene, Lindsey becomes determined to understand the tragic death of Captain Willy Riggs in an effort to find a way to save herself and the lighthouse bakeshop she created.

What a wonderful read and a great start to a new series. Murder at the Beacon Bakeshop is everything cozy lovers enjoy – murder, humor, and budding love. The characters are well-crafted and the plot is very strong.

This book is engaging from the start and the twist revealing the killer is a real shocker. I must admit that I did not see it coming because there are several red herrings that threw me off who the actual killer was. This is a great thing because it will keep readers interested in the story and guessing whodunnit until the big jaw dropping reveal. The end is very sweet and sets up for the series to continue nicely.

Readers will find that this series has a lot of promise. I cannot wait to read the next installment.