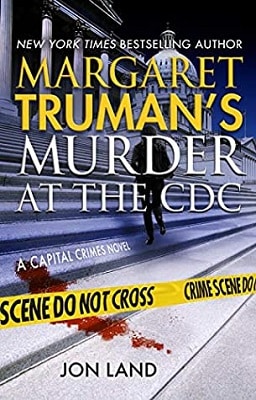 Murder at the CDC

Having been a long-time fan of this Margaret Truman series, I was saddened to learn of her death. However, after Donald Bain took up the reins and subsequently died (notice an eerie theme genre?) Jon Land took over and has done a fabulous job keeping the flow of the series, keeping the attention on Robert Brixton, Bain’s created protagonist.

Brixton has been contacted by his best friend, Mackensie Smith, to help with a delicate situation. During the investigation, Brixton is distracted by a shooting spree on the steps of the Capitol. He connects with one of the logical authorities who is investigating, which opens up an intriguing and somewhat confusing connection to the CDC, an event that tangentially pulls Mackensie Smith into the mix as a well. Brixton soon learns of a mass poisoning event, with ties to the CDC. Now, he will have to help stop it before things get exponentially worse. Land does Margaret Truman (and Donald Bain) justice with yet another addition to the series. Fans should definitely take a look at this one!

Robert Brixton has forged quite the relationship with lawyer Mackensie Smith over the last number of years, so much so that investigating a delicate situation is not out of the question. When Smith asks Brixton to look into whether a young woman is actually an illegitimate child of his, things proceed with caution and ease. During their meeting, Brixton has no doubt that Smith has a daughter, but remains cautious about revealing too much.

Brixton is soon distracted when a shooting on the steps of the Capitol includes his grandson’s classroom. When the teen cannot be contacted, Brixton rushes to the scene to help. He connects with Kelly Luftus of the US Capitol Police’s Protective Services, who thinks that she might have a link to the shooter. She runs some leads and Brixton adds some intriguing information his grandson has revealed as well.

A short time later, Smith calls Brixton to explain that his daughter has been rushed to Walter Reed, victim of an apparent poisoning. In a panic, Smith wants answers as his paternal side rises to the surface. Brixton and Luftus soon discover that there is more to the story than just the Capitol shooting, but rather a number of students at the school who were poisoned and died recently.

All the while, at a secret facility in Colorado, a man is harvesting what he calls the most deadly toxin ever. He’s planning to release it, which could decimate the population in one day, though no one is aware of what he has or his plan. As Brixton and Luftus hone in their investigation, it will only be a matter of time before the pieces come together, but will it be too late? Land does a marvelous job at keeping the intensity Truman made popular with this series. I can see that these books are in safe hands!

In my readings career, I have become attached to a number of series by authors who pique my interest. When I become enthralled with a series, I want to learn as much as I can, hoping the author will provide me with the needed insight. However, in the event of their death, particularly when a series is not yet tied off, there is a lingering concern about how things will progress. Some of the series are taken up by others, in hopes of breathing new life into them. Many fail to capture the same impact with their stories and narratives, but Jon Land bucks that trend, providing new life into an already long series. He’s done well to make it his own, while also keeping true to Margaret Truman’s roots. This is surely reason enough to keep reading the novels and trying to see how things will progress.

Robert Brixton remains at the center of this piece, though he is not alone. The introduction of Kelly Loftus provides some added spin to the story and leaves the door open to see if they will collaborate more in the future. Brixton has quite the past, which Land has developed since taking over the reins, but there is still something about him at present that keeps the reader curious about where things are headed. Adding some personal impact in this piece, Land allows his protagonist to grow and show a softer side, if not one that shows what fuels him open a regular basis. Add to that, the Loftus angle keeps things from being too predictable and leaves readers wondering where future novels by the author might land, if you pardon the pun.

While many of the early Truman novels turn to Washington, DC landmarks, the story uses a less than obvious locale as its epicenter. Land pulls in some of the key characters that longtime and more recent fans have come to expect, developing a narrative that is both intense and highly descriptive. The reader can see the momentum increasing as the story comes into its own, with short chapters that push things along. A variety of locations and subplots keep the story from becoming too predictable and the spin on the delivery has the reader intrigued and informed in equal measure. Land has used his fabulous writing style to pull the reader in and leaves them wanting more, even as the series novels pile higher. I am eager to see what’s next and how Land will navigate further into the electric nature of DC life.

Kudos, Mr. Land, for another winner. I love this series and am happy you took it over. Now, I may have to explore some of your own work to see how it compares.

Murder at the CDC available at:
Amazon