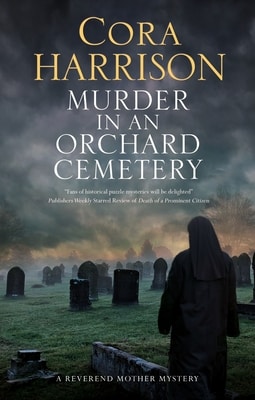 Murder in an Orchard Cemetery

It’s Ireland in the 1920s, and although the war is over, the IRA is still active and there is great poverty. This underscores Murder in an Orchard Cemetery by Cora Harrison, the eighth in the Mother Superior Mystery Series.

Harrison does an excellent job of weaving history and some regular characters into the plot with just enough description so that the reader has no difficulty understanding the area or the people and the book can easily be read as a standalone.

The plot moves at a measured pace throughout the book and, while it is easy to determine the identity of the murderer, that does not lessen enjoyment of the book. Mother Superior is a kind, gentle woman who puts a benevolent face on a classic Roman Catholic character. In this novel she is attending an annual retreat which is normally reserved for the Bishop and other heads of Catholic convents. While the retreat is normally a silent one, this year the Bishop has invited the candidates who are running for alderman to join the group and therefore rescinded the order for silence, Mother Superior is quick to point out that far from seeking religious renewal, the candidates are there to curry favor and often she remarks about how she longs for the silence of previous retreats.

There is great poverty in the area, as well as much disease and a marked separation between the wealthy and the poor. There has been a recent epidemic of diphtheria and when the disease is reported to be active once again Mother Superior becomes concerned both for her convent, the children they care for and the novices of the convent hosting the retreat. Her concern for the novitiate of the convent is in stark contrast to their Mother Superior who is a cold, rigid woman.

The murder of one of the candidates is significant to the host convent as he was the father of one of the novices. She is young, thin, and appears to be in poor health which concerns Mother Superior although her counterpart does not share these sympathetic feelings. As Mother Superior tries to secure some assistance for the young girl, she contemplates who might have killed the man. Is the IRA responsible for his murder or is someone else, hoping the IRA will be blamed? Perhaps his murder has more to do with politics. Is one of the other candidates so desperate to win the election that they are willing to kill the competition? Or is it because the victim has recently been rumored to be engaged to a rich widow who had been thought to be preparing to marry one of the other candidates?

Chapters focusing on Mother Superior and her thoughts are interleaved with chapters that provide information about the investigation through the actions and thoughts of two recurring characters. Inspector Patrick and Eileen have both been watched and shepherded through school and a successful scholarship application. Both Inspector Patrick and Eileen are recurring characters, both of whom have been known to Mother Superior since they were young children.

Readers of the series will likely enjoy the opportunity to spend time with characters they have come to know and appreciate. Newcomers may enjoy the book as a standalone, but not feel the connection to recurring characters they might have felt had they invested in the series. For readers who are seeking a new series and prefer mysteries that focus on the investigative aspect as well as general thoughts on the part of the more central characters, this is a fine book to read and assess their interest in continuing with the series.

My thanks to Canongate Books Severn House Publishing for providing an advance copy for review. The opinions expressed here are entirely my own.