Take the glitz and glamour of 1919, add the conflicted feelings of many of the English toward the German people, mix in a long overdue trip back to see family in Yorkshire, and a visit from Verity’s great aunt, Tante Ilse, and you have Murder Most Fair.

This is the fifth in the Verity Kent Mystery series featuring former Secret Service agent, Verity Kent and her husband and war hero, Sydney. The book is an excellent stand alone with a well-plotted mystery, some good development of new characters and just enough information regarding recurring characters to satisfy any questions readers may have.

Tante Ilse’s arrival at Verity and Sydney’s London flat is both cause for celebration and dismay. Much as Verity is happy to see her great aunt, there are some who are obvious in their dislike of her and her maid because they are German. The visit is made more complicated when Tante Ilse tells Verity she is being threatened. During the war, she helped Verity smuggle a German soldier across the border. Now someone in her hometown is threatening to reveal her as a traitor to Germany.

Verity and Sydney decide to visit family in Yorkshire and take Tante Ilse along. That will get them out of London and to a place Verity hopes will be more accepting of the pair. This will be Verity’s first visit back since her brother, Rob’s death and she is dreading it. She knows she will be forced to face her grief, and deal with her mother, who strongly disapproves of many of Veritiy’s choices. Since Verity can’t divulge her war work and because she didn’t come home when her brother died, she correctly anticipates strong criticism from her mother.

Arriving in their hometown, reports of an unknown German man who has been seen around the village create concern. Anni, Tante Ilse’s German maid, has been seen talking to an unknown man and rumors are spreading that perhaps she or Tante Ilse are German spies. Verity worries that he is somehow connected to the assignment she had when she asked her great aunt for help. Questions become even more pointed when Tante Ilse’s maid is murdered. Fearing what will happen if the villagers find the man before they do, Sydney and Verity decide they must find him and solve the murder.

There is ample opportunity for the reader to solve the case. Is the unknown German someone who has a grudge against Tante Ilse or her maid? Who murdered the maid and why? Some of the villagers want to blame the unknown German and have already convicted him in their minds. Is he in danger if they find him before Verity and Sydney do?

During their visit, Verity is also dealing with grief she hasn’t faced for five years. Huber does a superb job of portraying grief, showing it affects different people in different ways. Verity, Sydney, and Verity’s brother’s Freddie and Tim are all struggling with their own grief. What do they do with their survivor’s guilt and the grief they feel for men who served and died, especially Rob, Verity’s third brother. Then there’s Verity’s mother, who has the grief of a parent whose child has died and feels she received no support from her only daughter. Finally there’s Verity, who has managed to allow herself to believe, on some level, that if she doesn’t acknowledge his death, it won’t be real.

This book is much more than just a mystery/espionage novel. There are themes of isolationism, and the distrust of foreigners, the after effects of war even for the winning side, and grief in its varied forms are all part of the backdrop that provides the setting for the mystery. It is well written, and offers some good understanding, all couched in an engaging fictional story that is well plotted. This may be the best book of the series so far.

My thanks to Kensington Books and NetGalley for providing me an advance copy for review. The opinions stated here are entirely my own. 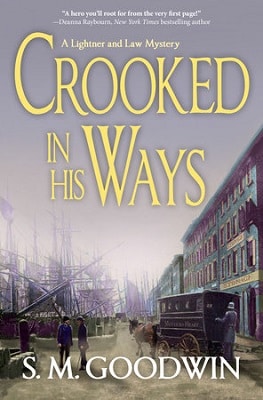