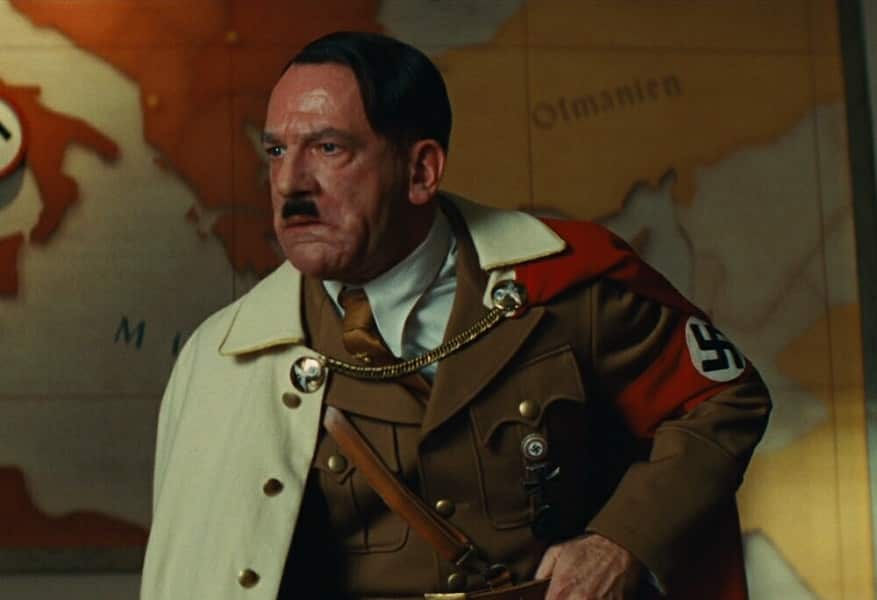 How the Nazi “brand” makes for an ideal baddie
Geoff Cook

When you hear the word “Nazi” what comes to mind?

Putting to one side a factual reaction such as World War 2 or Germany, if you came up with a single word, chances are it was something around evil or ruthless or cold-hearted. Perhaps you link the word to the Holocaust or concentration camps; perhaps ethnic cleansing or master race.

If it’s an image you envisaged, how about a figure in an SS uniform, emblazoned with a swastika, a long, black greatcoat, polished jackboots, a peaked cap and an Iron Cross around his neck? The more imaginative might have given him a monocle, a sadistic smile and a name like Baron or Count ‘von’ something or the other.

I doubt that few will have immediately settled on Nazi as the Anglicized acronym for Hitler’s National Socialist Party or directly brought to mind a Luftwaffe pilot, a crew member of a U boat or a foot soldier on the Eastern front, however committed to the Nazi cause they may have been. The term Nazi has a much more sinister ring to it, and it is this concept which has been perpetuated in popular culture since the 1940s.

During and in the years following the war, stereotyping Nazis as the sadistic and callous face of the enemy was invaluable as a propaganda tool to stimulate Allied patriotism. Paper was in short supply with books and magazines a rare luxury, leaving cinema as the main outlet to channel this patriotic fervor. Many of the propaganda movies of the time were directed by foreign nationals living in Hollywood who had escaped from the growing oppression of Nazi Germany. Take the chilling Hangmen Also Die! from Fritz Lang, released in 1943, which along with the 1978 original Inglorious Bastards, inspired Tarantino’s 2009 hard-hitting remake (deliberately misspelt) starring Brad Pitt.

The growth of the comic book market into the 50s saw the struggle against the Nazis as a commercial winner. As good conquered evil and Captain America battled with Captain Nazi, the stereotyping of the Nazis and their Japanese counterparts became evermore satanic with Marvel’s superheroes battling fire-breathing opponents to win the day. Ironically, the despotic behavior of a crazed foe also began to tip over into humor, with Nazis often portrayed as bumbling or incompetent, a theme that has re-occurred throughout the intervening decades.

When books began to be written about the war, they were almost exclusively non-fiction accounts, many detailing the horrors of concentration camps, the persecution of ethnic minorities and the ruthless approach of the captors. My own literary efforts were very much influenced by Yehiel De-Nur’s harrowing 1955 account of female concentration camp prisoners forced into sex slavery in The House of Dolls.

As we moved into the post-war period of changing times and liberal attitudes, so the growth and popularity of the Nazi theme percolated into all entertainment streams, TV, movies, literary fiction, and what you might class as “factual fiction” whereby real historic events are mixed into a fictional setting. The attraction of what had become by the 60s The Nazi Brand to an author or screenplay writer was the presence of a set of pre-established and well-known thriller characteristics. No serial killer can come to life in a crime novel and leave the reader apprehensive about what he will read on the next page without detailed and careful character, family, and personality construction. The ruthless, callous, and murderous intent of The Nazi Brand is self-evident simply by introducing the protagonist with a few well-chosen descriptive paragraphs. I ask you: can the term Nazi interrogation convey in two words a scene of torture with a battered and petrified victim tied to a chair in a brick-walled cellar with a solitary lightbulb swaying from the ceiling as the man in rolled-up shirt sleeves approaches, scalpel in hand? As distasteful, as you might find it, I am sure you’ll agree it’s an image very easy to picture in your mind because it’s been reproduced in various forms so many times before.

With the passing years, as the popular context of the war became cemented into history and engrained into the public psyche, it was a relatively straightforward progression to assimilate the deluge of propaganda into popular culture. In summary, evil rose, committed atrocities and sought conflict; good faced evil; evil began to succeed, but was eventually pushed back and defeated by good. As an aside, it is worth pointing out that the German attitude to the period of Nazism is much more complex and Third Reich credos were held by many sections of the population until the sixties when the 1968 youth movement finally perpetuated the belief that the Allies’ victory was Germany’s “day of liberation” from the Nazis.

Broadly speaking, literary fiction and the entertainment media have dealt with the war and The Nazi Brand in four strands:

Deliberately omitted from the groupings are prisoner-of war escape epics which combine elements of Groups 3 and 4 and storylines around major battles of WW2 which deal with confrontations between armed forces. In the thriller context, we are dealing in this review with a Nazi in the guise of an SS officer.

Let’s consider a few examples across the groupings.

All the Light We Cannot See – Multiple prize-winning Idaho-based author, Anthony Doerr, gives us a story of a developing relationship between a blind French girl and a young German orphan with a talent for working with communications equipment. The stark contrast between good and evil creates the tension as the couple grow closer in the face of the ruthless Nazi, Reinhold von (note the ‘von’) Rumpel and his obsessive (sometimes tending to be a little overplayed) pursuit of the ‘Sea of Flames’ diamond.

Under Occupation – This novel was selected to demonstrate the two major failings which can often let down a good thriller. Not to be unfair to the author, New York born, Alan Furst, the Night Soldiers collection is a very fine body of work and you may think it’s unreasonable to focus on just one book in the series. It is done to make a point. Firstly, over reliance on the reader’s appreciation of The Nazi Brand stereotype alone can work against the author and leave a two-dimensional, grey and instantly forgettable image. The reader needs to identify with the character in order to react in the way the author wants, otherwise the main protagonists are doomed to struggle against a bland and lifeless backdrop. Secondly, every thriller has to retain credibility and too many random coincidences or even minor plot deficiencies will spoil the reader’s ability to accept the storyline. Under Occupation definitely falls at this hurdle.

The Man in the High Castle by Philip K Dick and Fatherland by Robert Harris are standout examples of the ‘What if?’ genre and both feature struggles within a futuristic Nazi hierarchy between committed, yet often empathetic Nazis (John Smith and Odilo Glabocnik (Globo)). As society becomes ever more oppressed, others find themselves disillusioned with the regime (Rudolph Wegener and Xavier March). The power struggle between competing Nazis is also present in Len Deighton’s outstanding SS-GB, a ‘What if?’  in the sense that the plot is founded on the hypothesis of a German occupation of the UK in 1941 and is set during that period. As the main storyline eventually assumes the apparent attempt to smuggle the King out of Britain to the US, the reader is confronted with the vicious rivalry between the two SS officers, Fritz Kellermann and Dr Oskar Huth. Preconceptions of Nazi brutality are well worked in this novel.

My two most memorable Holocaust novels were both made into outstanding movies and look at the Nazi horror from extreme viewpoints. In both instances, the reader imagines/fears what the outcome will be, but is spellbound by the progression toward the end, always dreading the consequences of the Nazi death machine. Schindler’s Ark which eventually became Schindler’s List by Australian author, Thomas Keneally, is in the fact/fiction category. Throughout the struggle by Oskar Schindler to save a band of Jews from the gas chamber, the looming figure of a real-life Nazi is forever present. Amon Goeth was the sadistic and ruthless commander of the Plaszow concentration camp in occupied Poland. Goethe was the deranged face of the Nazi party, prone to kill people at will and recorded as setting dogs onto children and watching as they were torn apart. As Schindler’s black-market contact, Poldek says ‘If you see Goeth, you see death.’

The Boy in Striped Pyjamas by Irish novelist, John Boyne, has been criticized for its historical irregularities and trivializing the Holocaust, but this story of two young boys, Shmuel, a Jewish inmate of Auschwitz and, Bruno, the son of the camp commandant, shocks in a way no Nazi broadside could achieve. Borne of friendship and innocence, Bruno eventually becomes an unintended victim of the Nazi death machine. The storyline brings into sharp focus the fear and cruelty associated with the regime in the form of SS Lieutenant, Karl Kotler and of Bruno’s father, Ralf, whose strict, but loving approach to his family contrasts markedly with his hard and insensitive attitude to his captives and subordinates.

Comedy and satire have long been a part of The Nazi Brand. From Chaplin’s 1940 film, The Great Dictator, right up until Kelly’s Heroes and The Producers, the Nazis and Hitler, in particular, provide fertile ground to not only make fun, but point a satirical finger at the regime and the futility of war.

As material for the author of thrillers, The Nazi Brand remains a powerful ingredient for suspense and horror. In the face of so many competing atrocities over the last century, Nazi longevity can possibly be attributed to its definition as the ultimate form of racism; perhaps to the growth of neo-Nazi and extreme right-wing ideologies, including politicians who have made headway in securing the popular vote. In both reality and fiction, the Nazi reflects the extremes in nationalistic fervor fueled by division, insensitivity, and a lack of respect for our fellow man. As such, The Nazi Brand is likely to remain a powerful force for years to come.

Geoff Cook has a varied commercial experience in the UK, Brazil, Portugal, Spain and Italy. He is the author of two plays and four novels, the latest, a story built around a Holocaust survivor who is witness to the greatest robbery and cover-up of all time. The Last Rights is published in February.

Geoff is married with three sons and divides his time between a home on England’s south coast and the Portuguese Algarve. 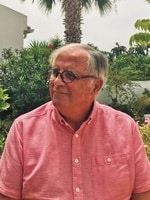 The 5 loneliest thrillers and why they’re so good

END_OF_DOCUMENT_TOKEN_TO_BE_REPLACED

What the most successful survival thrillers have in common

END_OF_DOCUMENT_TOKEN_TO_BE_REPLACED

The best and the most anticipated thriller books of the year.