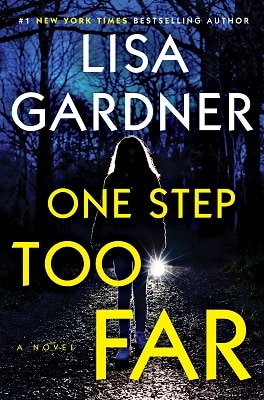 “Maybe in this case, it’s not about asking the right questions or having an ear for the wrong answers. Maybe it’s simply that I know and accept in ways most never do that for everything going on in this nearly impenetrable wilderness. The biggest danger comes from the eight humans who just hiked into it.” –Frankie Elkin, One Step Too Far
Frankie Elkin is my new hero. Another version of the famous Kinsey Milhone, with few friends, few regrets, and the heart of a wanderer, Frankie searches for missing people long after they disappear, when everyone else has given up. I haven’t read the first book in the new series by Lisa Gardner, but it is the next on my list. One Step Too Far has Frankie on the search for Tim O’Day, who has been missing for five years in the Popo Agie Wilderness in Wyoming. She joins a yearly search crew, headed up by Tim’s grieving father, Martin, when one member of the crew falls ill the night before the search begins.

Tim went missing five years ago, while camping with his four college buddies, as a bachelor party, before he married the love of his life. Frankie is on the team with the man’s three remaining college buddies, Tim’s dad, a local wilderness expert, a Bigfoot hunter with a big heart, and a Search and Rescue member and her cadaver dog, Daisy. Frankie learns quickly that, except for Daisy, each person is carrying a multitude of secrets. Quickly into the book, the search team becomes the hunted and Frankie must use her survival skills to get off the mountain and to safety before she becomes the next missing person.

Sometimes in novels, when there is a large group of people to identify with, it’s hard to learn what each person is about. Gardner does an amazing job with Frankie interviewing each character, several of whom are not happy to be there at all. By the end of the book, I cared about each one of them. Especially the three friends Tim had been with when he disappeared. Instantly cold to Frankie as the new person, she found that individually she was able to get them to open up to her about what happened and who Tim O’Day really was. As the story progresses, and they start to include her and her quirkiness, the reader cares about all of them. Even without reading the first book in the series, Gardner writes as if Frankie is a friend that we care about and get to know. Some of her history is explained throughout and we understand why she does what she does and how she is so successful at it; 16 successful expeditions. It is difficult to put into words how much we care, as the reader, rooting for the underdog to be safe and make it down the mountain, knowing she is battling an unknown killer.

I loved this book and read it in two sittings. It has everything you could ask for in a great mystery; secrets, suspense, excellent pace, and great characters. There is a twist at the end that will make the reader go back and read certain parts until it all makes sense. I am anxiously awaiting another Frankie Elkin novel to devour. One Step Too Far was published 01/18/2022 and I am definitely giving copies to all of my friends.

One Step Too Far is available at:
Amazon