Our Interest in Serial Killers

Tell me again why we love fictional serial killers?

You might be sat in coffee shop right now, or perhaps it’s late and you’re snuggled in bed. Whatever your situation, chances are you are part-way enjoying a story that contains death, deceit, and more red herrings than the North Sea. Maybe, like me, you’re reading a story that features a serial killer. But how many of us have stopped to think about why we find them so interesting? Because let’s be clear, fictional murder is big business and fictional multiple murder is fast-becoming top of the pile!

As an example, one of my favorites – Jeffery Deaver – has reportedly sold over fifty-million copies of his books. If you then think of sixty-six detective novels written by Agatha Mary Clarissa Miller (we know her better as Agatha Christie), it’s not surprising her books have reportedly sold over two billion copies! So, what is it that attracts us to the depraved characters that authors create? Are we perhaps all overdue an appointment with a shrink?

When you research the psychology behind reading this sort of book, there are four common reasons given (and I’ve added one of my own thoughts, too):

Right, so we all have our own reasons why we love to read the stories, but what makes a great fictional serial killer? Is it because we hate them? Is it because some of them are just downright charming in their own twisted way? Is it because the serial killer is often the writers equivalent of the ‘super-villain’ in movies? Or, if you don’t have a particular type you like to read about, is it anyone who can scare us in the comfort of our own home?

If you try to do research on ‘favorite fictional serial killers’ on Google, it hits you with 1.64m entries and it is a truly varied list; from Annie Wilkes, Dexter Morgan, Gary Soneji, and Pennywise the clown, through to unexpected characters like Dracula and Voldemort (yes, he who must not be named actually meets the criteria of a serial killer, as defined by the FBI).

I’d love to know who your favorite serial killer is and why – see the link at the bottom of this article if you’d liked to get involved in the debate – but let me start the debate by taking you through a list of my own:

Firstly, it has to be Hannibal Lecter. He makes my stomach churn and horrifies me, and yet he has a charm that is tangible. Softly spoken and well educated, he’s the sort of person you could have a very pleasant conversation with on a long-haul flight, without realising he was deciding on whether you’d be an excellent main course before bedtime. Admittedly, the written character has taken on a new depth after Sir Anthony Hopkins put everyone off fava beans, but Thomas Harris still wrote a fantastic yet deplorable monster who I can see why he was able to draw in his victims.

At this point, my wife would interject and make her pitch for Voldemort, but I’ve told her I’m writing this article’ not her.

My second favorite is responsible for many deaths, although he actually rarely pulled a trigger or set-off a bomb: that’s Macklin Hayes from the David Baldacci series, The Camel Club. He is a character you simply can’t wait for him to get comeuppance. He is cold-hearted, calculating and the person I see as responsible; more so than the assassins and misguided military folk he commands.

As you might expect, my wife still isn’t talking to me right now.

And the third ‘character’ I’d choose is whoever Lincoln Rhyme is trying to catch. My favorite author, Jeffery Deaver, has invented this quadriplegic Forensic Consultant who faces any number of different serial killers. For me, these books are more about the chase than the evil character themselves and with The Bone Collector, The Coffin Dancer, The Skin Collector and The Delivery Man amongst them, it’s easy to feel the thrill of being a virtual part of Rhyme’s team. Oh, the satisfaction of finding that all-important clue, of saving the next victim and solving the case.

By the way, my wife had left the room but has returned and flopped heavily onto the chair next to me, with a glare that suggests she’s bought me a one-way ticket to Azkaban Prison.

Actually, that previous point (the one about the satisfaction of solving the case); it’s true that working out the ‘who’ can be a very important part of a great reading experience, but what about working out the ‘why’? Why is someone killing so many people who don’t appear to have any common link, and why are they killing them at all with seemingly well-planned and perfectly implemented acts of violence? I love to sink into a book that makes me try to join the dots and, again from personal experience, it’s the ones where you triumphantly think “A-hah, I know who it is!” or “Of course they’re not random; it’s because ….”, only to turn the page and follow those up with a dejected “Oh” that I remember the most.

In summary, my interest in books with serial killers is rarely about the serial killers themselves: they’re about all the reasons I mentioned at the start of this article, because in the books I read, the author has never created any empathy for the killer. And that’s just how I like it.

Geoff Major lives in England, with his wife and their dog. Nearly 20 years ago, he had the idea for a book but his girls, work and ‘life’ took the majority of his time. Once the girls were grown-up, he spent 9 years completing unusual fundraising activities for charity (including cycling across Cuba, ski-trekking to the North Pole, and persuading friends and his eldest daughter to trek across the Sahara Desert for 5 days).

In late 2018, he hung up his boots and decided to try and get his idea out of his head and into print.

He currently works full-time for a charity, whilst trying to get his second novel out of his head and into print. 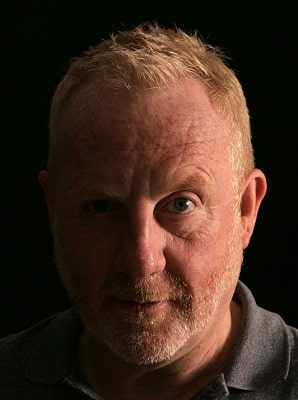 END_OF_DOCUMENT_TOKEN_TO_BE_REPLACED

Why we love serial killers on the big screen

END_OF_DOCUMENT_TOKEN_TO_BE_REPLACED

Why Blackmail is an Effective Plot Vehicle