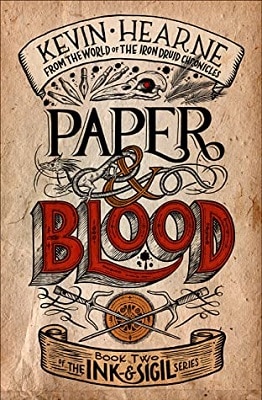 What we have here is a mystery cleverly tucked into a humorous fantasy mystery. Technically it is the second in a series—designated as Ink & Sigil #2—however it certainly can be enjoyed and devoured as a standalone.

Hearne seamlessly weaves the necessary backstory into the beginning of the book. Thank the Gods! and Kevin Hearne. Another chance to re-enter the delightful world of the Iron Druid—much to the delight of his legion of fans. This time through the eyes and action of the beguiling Al MacBharrais ( Mac Vare Ish), one of five Sigil Agents in the world, with his territory being Scotland and Europe. His job is to monitor and control visitation of spirits, creatures, and deities from the multiple other planes and pantheons. … especially the various creatures of the Fae. He not only makes and interprets magical contracts, but is able to create special effects and actions through the rendering on Ink “Sigils.”

He handcrafts the inks from rare ingredients which instill the latent magic. The Sigils manipulate one’s visual apparatus, sort of hacking the brain. For example: Sigil of Porous Mind leeches away the target’s usual priorities and makes one open to suggestion with the secondary effect of difficulty remembering what happens in the next few minutes. MacBharrais crafts the Sigils on small placards and once revealed to the eyes of the target, result in the desired “beneficial” effect. These are used only to accomplish good for the citizens of earth and protect against the denizens of beings from other planes. … especially rogue elements of the Fae.

Al is comfortably entrenched in his Glasgow shop when he receives a phone call from Chen Ya-ping, an apprentice of the sigil agent, Shu-hua, whose territory is Australia. Not only has her master “gone missing,” but also another sigil agent, Mei-ling and her apprentice have disappeared. Apparently, she actually contacted Mei-ling first, since her territory of Taipei was much closer. Both sigil agents simultaneously experienced the “twinges” which amounts to a sudden chill along your spine, accompanied by the sensation someone is screaming in one of your ears. This usually occurs when an uninvited rogue Fae or even God has crossed over into the earth plane. This disturbing signal was coming from the Dandenong Ranges, in the Australian bush. Both agents went to investigate without any further contact from either. What powerful being has tripped the wards of our plane and more importantly: Why? With popular culture embracing “science,” most of humanity dismisses the mystical and magic. Such a terrible mistake to be made, with the elaborate universe created in the mind of Kevin Hearne.

Hearne does it again! He weaves a complex narrative filled with magic, wit and whimsy and suspense that leads one down a twisted and exciting pathway filled with creatures from unearthly planes. His masterful world building is astounding . Al and his crew will battle chimeric creatures, composed of body parts of several animals. Their first encounter is an engagement with a creature with the head of a Komodo dragon, forelegs of a praying mantis, fused onto a chassis of a giant tarantula, except the abdomen is covered with the armor of a tortoiseshell. Thankfully Al is accompanied by the Iron Druid himself, along with his two “dugs” —Oberon the Irish Wolfhound and Starbuck the Boston Terrier—both who can understand language and are fierce warriors in their own right.

A number of formidable associates reprise their more than supporting roles. Among his eccentric and wacky entourage are his whisky-loving hobgoblin, Buck Foi (who is also wise and talented) and his office manager and bodyguard, Nadia, who happens to be a “battle seer” and usually sheaths herself in a symphony of black. Black lipstick and nail polish accompanies her spiked mohawk, along with her studded choker and belt and black leather corset and boots. And, we can’t forget his Canadian receptionist, Gladys Who Has Seen Some Shite, who certainly is more than she seems. One can never get enough of the over-the-top and ridiculous humor, as our bizarre crew go into battle to save the missing sigil agents. The action and battle scenes are surreal.

Thanks to NetGalley and Del Rey books for providing an Uncorrected Proof in exchange for an honest review of this delightful and hilarious gem. 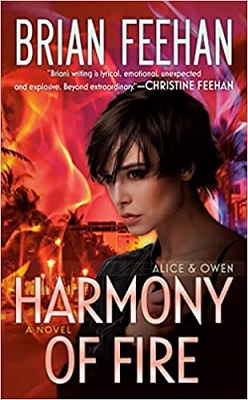