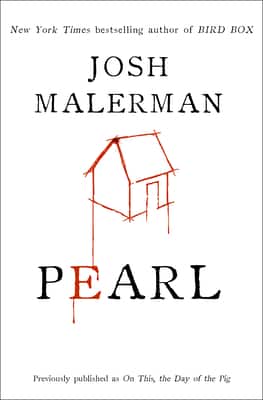 Josh Malerman has had two of his limited edition books re-released this year. The first is Goblin, and the second is Pearl, which was previously released as a  limited edition by Cemetery Dance with the title, On This, the Day of the Pig. With this reissue by DelRey, Pearl is more accessible to readers, and like other Josh Malerman novels, this is a reward to the readers.

Pearl takes place on a farm outside of Chowder, Michigan, just down the road from Goblin. The novel starts on Kopple farm where Aaron and Jeff are visiting their Grandpa. Jeff goes out to the pigpen and sees Pearl, a pig with one eye that sits like a human and gives everyone an uneasy feeling. Pearl starts to talk to him, telling him to kill one of the other pigs. Jeff, a seventh grader, cannot help but obey. This is the beginning of Pearl really starting to wield his power, the pig has telepathic abilities and can make people do whatever he wants them to do. There has always been an uneasiness on Kopple’s farm, people driving by get a bad feeling that something is going to happen on that farm, and after Jeff kills the pig for Pearl, the day of Pearl’s reign begins.

There is no question that this is a horror novel. Pearl is definitely a mad tyrant and the creature turns to slaughter within pages. We are witness to the killing or capture of anyone who tries to cross Pearl, and as more and more people show up to the farm, Pearl has more people to control. As the story unfolds, we learn more about Pearl, and how he has really been in charge of the farm for years, making the farmers teach him everything about the world so that he can bring the world down, but he also has an ability to make people feel like it is their idea to do things for him. The manipulation that Pearl uses is taught to him, and so when the day comes and Pearl takes over, he makes some people think that it was their idea the entire time.

Pearl is one of those stories that hooked me from the beginning. Sometimes with horror you have to suspend belief from the very beginning, and Josh Malerman lets us know from page one that this is about an evil telepathic pig, as if he is letting the reader know from the start that you are either going to come along or be done. It does not feel like this should work at all, mostly because Pearl is still stuck on the farm, but it does because people keep coming to him, and he keeps using them for his plans. Malerman does a good job balancing the present day and the history of the reasons why some of the people are arriving. Pearl gets a fleshed out backstory and proof that he has been in charge of people for longer than anyone cares to admit. In the end, Pearl is a novel that I will want to revisit and recommend because there are no other novels like this. Pearl not only manipulates the minds of the humans and animals around him, but he takes over the reader’s mind as well.

I received this as an ARC from NetGalley in exchange for an honest review.

Pearl is available at:
Amazon
Books-a-Million