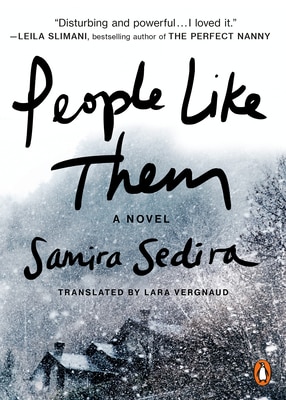 Inspired by true events, People Like Them is a short and shocking exploration of what can happen when the worst case scenario becomes chilling reality.

In 2003, in the Alpine Haute-Savoie region of France, the five members of the Flactif family went missing, later discovered murdered by their next-door neighbor over a seemingly minor dispute. Samira Sedira has taken these events and extrapolated them into the fictional People Like Them; her English language debut, and an impressive one, at that.

Alternating between past and present, the mystery is not who did it – we know that from the start – but rather what could have pushed them to that point. It all unfolds a layer at a time, slowly building a picture and a foundation to a story that leaves the reader feeling badly for everyone involved. This may be a fictional take, but the author deftly avoids the easier black and white morality in favor of the much more complex and realistic shades of grey.

This kind of novel takes a delicate hand, and the author doesn’t waste a single word. Nothing takes place in a vacuum, and packed into these pages is an honest, but sensitive, portrayal of a confluence of events and timing that leads to the murder of an entire family. It’s an intense read, almost claustrophobic – but to expand it would have diluted the impact. It should be shocking – but it also has to be readable, and it’s a fine line that the author and the translator have managed with precision. Most importantly, perhaps, this is the kind of book that you shouldn’t pick up late at night, because you won’t be putting it down again any time soon. People Like Them is the best kind of compulsive, and will keep you glued to its pages until they’re done.