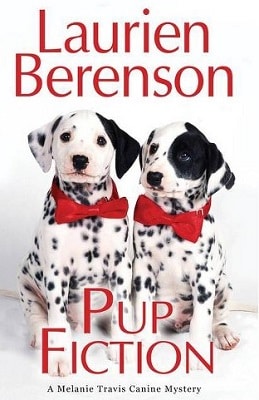 Melanie Travis is a wife, mother, teacher and amateur sleuth whose nosing around has occasionally helped the police solve crimes. Melanie, her husband Sam, their sons Davey (14) and Kev (5), and the family’s six dogs (five standard poodles and a rescue pup) live in a big sprawling house in Stamford, Connecticut.

Summer break has just started, and Davey and Kev will spend their days at Graceland Nursery School Summer Camp, where Davey will be a counselor and Kev will be a camper. Melanie has known the school’s proprietor, Emily Grace, for more than a decade, and the women are friends.

On the first day of camp, Melanie drops the boys off and stops at Emily’s office to say hello. Emily is frazzled and confides that her trio of Dalmatian puppies – which she’d received as a gift – escaped from their pen, ran into the road, and had to be rounded up. That’s just the beginning of trouble at the nursery school, which suffers from repeated mishaps over the next few days.

Melanie and Emily suspect sabotage, but a motive seems elusive. Then the dead body of Emily’s conman ex-husband, Will Grace, is found in the woods behind the school, and the police suspect Emily murdered him.

Emily asks Melanie to help clear her name, and Melanie immediately gets on the job. She speaks to the victim’s brother, friends, and acquaintances, and also interviews people who might have wanted to cause trouble for Emily. This includes property developers who want to build on Emily’s land and a Homeowners Association head who’s been trying to get Emily to close the school for years – citing noise and traffic.

Emily has other troubles as well. The fee to lease the school property is going up, and she can’t afford to pay. Melanie consults her go-getter Aunt Peg about Emily’ s financial problems, and Aunt Peg – who raises dogs, shows dogs, and judges dog shows – organizes a canine-related fundraiser to help raise money.

Melanie is a prudent investigator, and when she discovers clues to Will Grace’s killer, she relays them to Police Detective Sturgill, whom she’s assisted in the past. This turns out to be a good move when Melanie finally confronts the perpetrator.

In between sleuthing, Melanie accompanies her family to two dog shows, where Aunt Peg’s standard poodle Coral is competing. Melanie’s fourteen-year-old son Davey is Coral’s handler, and the poodle – who’s accumulated 10 points in the show ring – needs two major wins to get a championship. The author describes Coral’s grooming and comportment – as well as how dogs are judged – all of which adds an interesting and informative element to the story.

The human characters in the book are engaging, but dog lovers will savor the endearing canines, especially Melanie’s black poodle Faith – who has ‘conversations’ with her owner.

This book is a good choice for fans of dog shows and cozy mysteries.

Thanks to Netgalley, Laurien Berenson, and Kensington Books for a review copy.