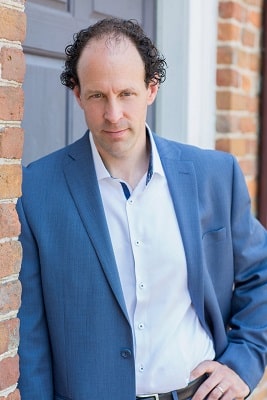 Brad Parks’ novels have been translated into fifteen languages, sold internationally as bestsellers, and won at least eight significant awards. His most recent, Interference, came out September 1 from Thomas & Mercer.

Q. Interference has a good amount of speculative going on, especially around quantum physics and entanglement. Is the book getting into the technothriller space?

Brad: I think those subgenre labels—Is it a “technothriller?” Or just a thriller that happens to have some science in it?—are things reviewers and interviewers spend time thinking about. Readers just want a rip-roaring good book that takes them deep into a compelling plot, and that’s what I try to deliver. As for inspiration… When I’m drafting a novel, I’m usually too deep in my own story to think much about anyone else’s. But a few reviewers have likened this to Michael Crichton, and I’ll happily take that comparison.

Q. You’ve won the Shamus, Nero, and Lefty Awards, three of American crime fiction’s most prestigious prizes. What’s your secret to writing a great book in the genre?

Brad: If there is a secret, I wish I knew it. I feel like all I do with each book is try to take real characters—people who are relatable, people who have the same strengths and flaws as everyone else, people you could meet in a grocery store—and then put them into some kind of terrible situation and make them work their way out. And then I hope readers get as much into those characters’ tribulations as I do.

Q. You famously write your books at Hardee’s restaurant. Besides those delicious Coke Zeroes, what brings you back time and again?

Brad: Hardee’s began as a kind of necessity. We had two toddlers bouncing around a 1200-square-foot house. There was no chance of getting writing done inside those walls, and we were living in a rural county where Hardee’s was the only thing open at 6 a.m., which is when I start writing each day. So Hardee’s became my writing sanctuary (because, yeah, free refills on Coke Zero!). These days, the kids are older and the house is larger but you know what? As a writer, when you find something that works for you? You stick with it. Period.

And, no, I haven’t been back since March. Which has been a real cramp in my writing process. I’ve come up with some alternatives, outdoor spaces and whatnot—none of them as good. Believe me, after I get the vaccine, my next stop will be my old corner table at Hardee’s.

Q. Your books are well known for their twists. How do you write a great twist?

Brad: I always say: Readers love to be wrong. But they love to be wrong for the right reason. In other words, you can’t just have the spaceship land or turn out to have been lying to them the whole time. That’s not fair play. And as a writer, I’m a big believer in keeping it fair with those readers who are trying to solve the puzzle. As for how to fool them? It’s not easy. Especially when you’re talking about smart readers who know all the tricks I might be trying to pull. My friend David Corbett, who has written several terrific books on character, has a great tip that I often follow: Every character needs to have a secret. It’s often in those secrets that you find your best twists.

Brad: My next book is called Unthinkable. It’s about an ordinary stay-at-home dad who is approached by a shadowy secret society and told that in order to save the lives of a billion people, he has to do… the unthinkable.

The cozy mystery author on CHAPTER AND CURSE and more

END_OF_DOCUMENT_TOKEN_TO_BE_REPLACED

The romantic suspense author on MEANT TO BE and more