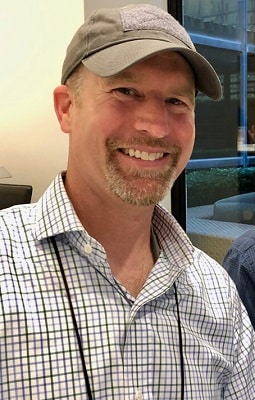 Brian Andrews is a US Navy veteran, nuclear engineer, and former submarine officer. He co-authors the Wall Street Journal and #1 Amazon best-selling Tier One military thriller series with Jeffrey Wilson under the co-author brand Andrews & Wilson. Starting 2021, he and Jeff will be taking over duties writing the W.E.B Griffin Presidential Agent series. His latest novel, Collateral, is available now wherever books are sold.

Q. You and your co-writer, Jeff Wilson, are taking over the W.E.B. Griffin Presidential Agent series. Huge accomplishment. What can readers expect?

Brian: Thank you! We’re ecstatic to be working with the WEB Griffin estate to carry on the Presidential Agent series and bring Charley Castillo back to the page where he’ll take on missions only the Presidential Agent can tackle. The last installment in the series, Book 8 Hazardous Duty came out in 2013 and left plenty of room for both the characters and the series to evolve. We’re excited to continue the saga for existing readers and also bring any Tier One fans who might not have read Griffin over to the series. And since you asked, readers can definitely expect high stakes geopolitics, military characters, and lots of Tier One style action.

Q. What’s it like to write novels with another person? How do you divide and conquer?

Brian: Jeff and I write using the three-act Structure. We brainstorm each act sequentially and we write them in order. We divide up writing duties by chapter and POV. Every Andrews & Wilson novel is written in the third person with multi-POVs, and we are very disciplined in having only one POV per chapter.

Many readers assume, for example, that one of us writes all the John Dempsey chapters and the other writes all the Elizabeth Grimes chapters in the Tier One books, and that we just blend them together. That’s not the case, however. We rotate character POVs so that both authors get a chance to spend time in each and every character’s head.

The invariable follow-up question becomes “then how do you get a consistent voice throughout the novel?” The answer to that is a single word: EDITING. In our method, both authors make multiple passes with permission to change any and all prose as deemed necessary. By the conclusion of the developmental editing phase, every sentence in the book has been “rewritten” by both authors—the end result being a singular voice, not Brian Andrews, not Jeff Wilson, but Andrews & Wilson.

Q. You’ve written speculative fiction with big sci-fi themes (RESET) and have a successful military thriller series (Tier One). What are some of the joys of writing in each genre? How about challenges?

Brian: Like most authors, I was a fan first, before becoming a novelist. I grew up during the ground-breaking era of military and espionage thrillers, reading the genre greats like Tom Clancy’s Hunt for Red October, Robert Ludlum’s Borne Identity, and Ken Follett’s Eye of the Needle. These authors and their novels have inspired an entire generation of veterans and active duty military personnel to serve their country, and they also inspired today’s current generation of veteran thriller authors.

I love writing in the genre forged by these icons, while being able to bring my experiences and vision of military life and service to the page. The greatest challenge to writing in the genre is walking the tightrope between authenticity and operational security. Jeff and I want to tell exciting stories that resonate with our brothers and sisters in uniform without compromising their tactics and methods or putting them at risk.

As far as RESET is concerned, writing a novel outside the pure military thriller genre allowed me to tap into an entirely different area of interest. I wrote the book to pay homage to the tin-foil hat conspiracy thrillers of the 80’s and 90’s while tackling two of today’s most prominent and perceived existential threats—climate change and artificial intelligence. In speculative fiction, the burden of authenticity is not so heavy. I don’t have to worry about OPSEC or how far I can push the reader before he or she must suspend her disbelief. Writing sci-fi thrillers and speculative fiction is liberating because the world-building and technology is only limited by my own imagination.

Q. You’ve written for several different publishers over the course of your career and are a frequent contributor to the careerauthors.com. What are some of the biggest writing lessons you’ve learned along the way?

Brian: Great question and, yes, I definitely have some lessons learned and advice to share!

First and foremost, embrace the adage All Writing Is Rewriting. What I mean by this is simply that as I have matured and advanced in my career, I’ve come to realize that writing a novel is an iterative process. The worst draft of every novel is the first draft. Think about that for a second and it’s pretty profound. Just because I happened to type some words on the page, doesn’t make them brilliant. I now approach each novel with the idea that every sentence I write is subject to revision. Every scene is subject to change. Every dialogue exchange is open to rework. Only through rewriting can you find places to add conflict, intensity, suspense, and clarity or conversely to delete cumbersome, redundant, boring, or confusing prose.

My second piece of advice, Perfect Is the Enemy of Good, works hand-in-glove with my first piece of advice. While you are rewriting your novel, you must never forget that at some point you must stop polishing the chrome and take your speedster for a joy ride. There are definitely diminishing margins of return in this business, so once you’ve taken your book through an honest and brutal Developmental Edit and made it as tight and thrilling as you know how, then turn that sucker in to the publisher and get to work on the next one.

Third and finally, always keep in mind that fiction Readers Want to Be Entertained & Inspired, especially in these troubled times. I think there is a temptation in the current climate to go dark and probe the deepest and most vile depravities of the human mind and soul. Well…newsflash, we’re there. It’s been thoroughly probed in both fiction and non-fiction. Don’t be afraid to buck this trend and write characters that inspire. Don’t be afraid to offer a ray of hope. I’m not saying to divorce your novel from villainy—every great hero needs an equally great villain—but resist the urge to tell a story where every single character is a backstabbing, corrupt bastard and depravity wins the day.

Q. What do you love to read in your spare time?

Brian: I generally choose to read outside the genre were I’m spending all my time working, which means I usually delve into science fiction, fantasy, detective stories, or non-fiction. I also pick-up books that come highly recommended by other authors. There’s so much great material out there and simply not enough time!  Here’s some of the books I’ve read over the past few months and one on my TBR pile:

Brian: Jeff and I just started writing Book 2 in our new Sons of Valor series. The novel doesn’t have a title yet, but it picks up where Sons of Valor left off, following LCDR “Chunk” Redman and his band of Tier One SEALs as they take on a terrorist mastermind who’s using asymmetrical warfare to wreak havoc in the Middle East and abroad. Sons of Valor is a shared world series with our Tier One series which tells the story of John Dempsey and Task Force Ember as they travel the world and conduct impossible black ops missions.

The thing that’s so great about Sons of Valor is that it lets us explore an alternate thread of what happened to the Tier One unit after John Dempsey left. Book 1, comes out June 8, 2020 from Blackstone Publishing and is available for pre-order. Expect lots of action and geopolitical intrigue, along with some great character dynamics.

The bestselling author on travel, mentorship, The Next Wife, & more.

END_OF_DOCUMENT_TOKEN_TO_BE_REPLACED

The historical suspense author on THE WAR NURSE, great reads, and more