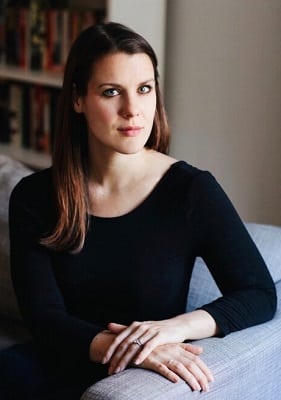 Caitlin Mullen’s debut, Please See Us, was called “Spellbinding” by the New York Times. She has worked as a bookseller, a creative writing instructor, and editor for The Southampton Review. NPR’s All Of It named Please See Us as one of the best books to read during the pandemic.

Q. Booklist called Please See Us “almost unbearable suspense.” What are your go-to techniques for building suspense for the reader?

Caitlin: I think authentic suspense comes from controlling the way the reader receives information throughout the novel, which can be achieved in a variety of ways. In Please See Us, I tried to take advantage of the switches between narrators as a way to both allow the reader to see a little more than any one character could see on her own, as well as prompt the reader to ask questions about the ways these narrators might be related, how their stories might intersect. I think good suspense novels often play with time in interesting ways, and build intrigue from the discord between past and present narratives. We read to find out what happened, but also to find out why or how something happened, and suspense can also come from chipping away at these questions too.

Q. How about twists? Can you have too many?

Caitlin: I love twisty novels and films, as long as those twists are come by honestly—which is a really hard thing to do! I think the times I balk at “twists” are when they come from a first-person narrator who has deliberately withheld a major piece of information about themselves, only to reveal it later as a surprise for the reader late in the game. Something about that feels artificial and dishonest to me, unless there is a good, character-specific reason to withhold that information. It can be hard to navigate that balance: what is genuine suspense and what feels contrived in a way that is maybe not in line with the rest of the novel or with the protagonist.

Q. How did your childhood in upstate New York and the Jersey Shore (not to mention later life in Brooklyn) affect the setting of Please See Us?

Caitlin: Setting was a huge influence on me, and one of the reasons I wanted to write this book was to give myself the opportunity to write about the Jersey Shore in particular. The story of the murders and of Clara and Lily sort of came in later. When I started the book, all I knew was that I wanted to use the beautiful, yet eerie, spaces of the salt marshes in the novel, as well as the many idiosyncracies and contradictions of Atlantic City, so that place felt like a character too, one that affected the way my other characters thought and acted. Setting can be really active in terms of character development, and I think it is crucial to establishing the mood of a novel.

As you mention, I grew up in upstate New York as well as the Jersey Shore, and as different as those places are, moving between them helped me look at place as an outsider, someone who meticulously catalogs the sensory experiences of physical environments, and that’s a big part of how I approach writing. It influences so much of what I do: voice, mood, character. More often than not, I start with setting as a way to activate conflicts both inside and outside my characters’ heads.

Q. NPR listed your book as one of the best to read during the pandemic. How has the global shutdown affected your publication and current writing?

Caitlin: I was lucky enough that my book came out maybe a week before the world seemed to come to a stop, so I was able to glimpse it in bookstores before we all hunkered down inside our homes, before those stores were closed. But still, I would say that it’s a tricky time to be a debut novelist. On one hand, I am invested in my book finding readers, but on the other hand, I was in New York this spring, when things were particularly bleak, and it also felt like there were much bigger, more dire things to worry about than say, how my novel might be received. In terms of my current writing, I have certainly felt distracted by the ups and downs of the news cycle, though I have tried very hard to protect at least an hour or two of my mornings for creative work. Some days that is more difficult than others—especially as the mother of a young child without access to childcare—but now most days I feel grateful to have my creative work as a refuge.

Q. You’ve worked as an essayist and bookseller prior to your career as a writer. What did you take away from that to help your novels?

Caitlin: Being a bookseller was incredibly important to my development as a writer. Not only was I constantly learning about new writers and new books (or discovering new-to-me classics) but as a bookseller I was also often asked for recommendations by customers, which meant that I had to make a persuasive (but still honest) case for my favorite books in the store in the hopes that they might fall in love with them too. That experience helped me think about writing from the reader’s point of view: what, I asked myself, would someone say about my book if they were tasked with describing it to a potential customer? What makes this book unique? It helped me pin down what might be singular and distinctive about the story I was telling and how I was telling it, as well as look at opportunities to really bring those elements to the forefront as much as possible.

Caitlin: I am in the process of expanding a short story I wrote and published during graduate school into a book-length novel. It was something that I thought I was done with, but then this year I was inspired to revisit it. I’m superstitious so I won’t say much more than that, but I’m in the process of working through a second draft right now, and am feeling excited about it so far.

The romantic suspense novelist on THE RUNAWAY HEIRESS, acting, and more