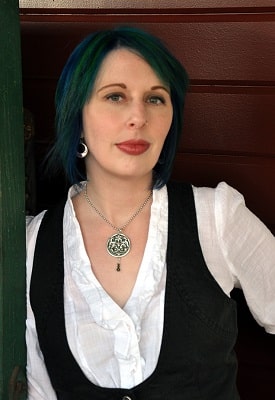 With twenty-three full-length projects under her belt, Cherie Priest is a force in the suspense/gothic/thriller/horror/sci-fi/steampunk scene. Her most recent books are The Toll, The Agony House, and The Family Plot. Her best-known book is probably Boneshaker, which was nominated for a Nebula Award and a Hugo Award.

Q. Suspense is at the heart of some of your best-known works, from the disappearance of Davina in The Toll to the test run of the Boneshaker (in Boneshaker) that destroys city blocks and unleashes a terrible subterranean gas. What is your approach to suspense?

Cherie: Years ago I had a professor give me a great piece of advice: If you’re struggling with the tension and can’t seem to crank up the suspense, give your characters a time limit and then, in act three, cut it in half. I don’t always follow that advice, but I like the sentiment—and you can adjust it for scale and utility, if desired.

If the tension comes from a chase, you can double the distance between your parties if your protagonist is the chaser; and cut it in half if you’re writing the chase-ee. Or like in Boneshaker, (since you brought it up), Briar goes looking for Zeke – who gets farther and farther away from her as the story progresses. She doesn’t catch up to him until the very end, partly because things are constantly thrown into her path to slow her down.

Not all distance has to be literal distance, of course. It can just as easily be a rising difficulty level. At any rate, it was a flexible, adaptable piece of advice and I think about it a lot.

Q. What do you want readers to feel when they’re reading your books?

Cherie:  It depends on the book. Often dread, sometimes fear, routinely a creeping concern that leads to outright terror. Once in awhile, catharsis. Mostly, I just want people to enjoy the ride—for whatever their value of enjoyment may amount to.

Q. When did you first realize you wanted to write? And what events in your life or upbringing do you think contributed to your steampunk/sci-fi/horror/suspense style?

Cherie: I mentioned in another answer that my mother’s take on fiction was very strict, and my reading was closely monitored – but in addition to this, the church we belonged to was very eschatological in nature, and I spent a lot of time being absolutely terrified by what I was told there.

Jesus was going to come back any minute, don’t you know? It was a shame my father wasn’t going to go to heaven, since he didn’t love Jesus anymore; and no, not my dog, either – she doesn’t get to come. Or any friends of whom my mother disapproved. Et cetera. Everybody was going into the lake of fire, because Jesus loves us, hooray!

Anyway. Much like bullied kids who grow up to be bullies, I was a scared kid…and now that I’m grown up, I like to scare people.

Q. Which authors have influenced you the most? And what have you read lately that you enjoyed?

Cherie: Dead ones, mostly. When I was a kid, my fiction intake was very strictly monitored by my very conservative and religious mother. I was allowed to have Christian fiction and literature, and nothing else. Lucky for me, Mom’s idea of “literature” amounted to “Is the author dead?” Which actually gave me plenty of room to get into trouble.

Very early, I glommed on to mysteries. Arthur Conan Doyle, Agatha Christie, Dash Hammett, and their imitators. (Never been a Chandler fan, though. Don’t @-me, as the kids say.) Then I discovered horror—mostly Victorian horror, like LeFanu, Blackwood, Poe, Stoker, Maupassant, and so forth.

I still have tremendous gaps in my reading experience; I didn’t really begin reading “modern fiction” until I was an adult.

I still love my old faves, but I’m still a sucker for a good gothic or some Terry Pratchett, perhaps, when I need some comfort reading. 2020 has not been kind to my reading experience, to be frank, but I’ve been enjoying some old mystery re-reads and a lot of nonfiction. Colin Dickey is one of my favorites, Sady Doyle’s new one is great, and Mary Roach is always delightful.

Q. Your cat, Spain, is huge! Does she play an outsized role in your life?

Cherie: Well, she used to. Alas, she left us in January of 2019 – at the ripe old age of 22. (Or at least that old, and likely older. We adopted her when she was an adult, and her true birthday remained forever a mystery).

You may be thinking of Quinnie, the Cat of Considerable Size who we first met as a tiny kitten, pulled screaming from an engine block. She was about six weeks old, very sick, and very pitiful. Our vet encouraged us to do our best, but gently suggested that it wouldn’t be our fault, if she didn’t make it.

She made it. She topped out at nearly 20 pounds, though that was frankly on the fat side. At present, she’s 14 pounds and rather tall/long. She’s very sociable, screamy, and beautiful. Every vet she ever meets describes her as “Quite a character.”

Cherie: My first mystery comes out next year, and I’m super excited about it! Grave Expectations is a little on the lighter/funnier side than a lot of my material, but it was a blast to write – and I guess I just felt like the world was dark enough already for the moment. At any rate, that’s in production now. I believe it’s slated for fall of next year.

As far as what I’m actually working on, right this moment: I’m doing a novelette for a “best of” compendium that’ll be out through Subterranean Press (probably also next fall, but I’m not sure yet); it’s called “Talking in Circles” and it’s about a support group for people who’ve survived exorcisms. Unless, of course, they haven’t.

There’s also something my agent and I are talking about, a modern horror/gothic that I’ve been noodling with for more than a year. I’ve been describing it as “Bowling for Columbine meets Haunting of Hill House,” and I think that’s pretty fair and true. It’s a present-day story about four survivors of a school shooting in the late 1990s, and the extremely haunted (now abandoned) building in which that shooting occurred. I have a full draft, but we’re still hammering it into shape before sending it out.