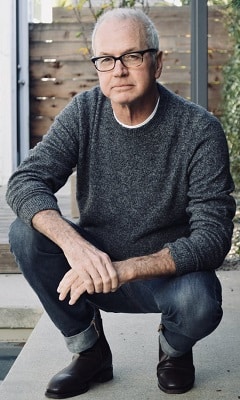 Chris Hauty is the LA Times bestselling author of Deep State, with a sequel, Savage Road, coming in January. His background is that of a playwright (Off-Off-Broadway productions, including South of American Business and Shut Eye, Big Mouth) and screenwrighter (thirty years working for every major movie studio, in nearly all genres).

Q. Deep State reads like a blockbuster movie, in all the good ways. Major twists. Action. Political intrigue. Given your Hollywood background, would you write the script? Who would you see playing Hayley Chill?

Chris: The book was optioned by a major tv studio soon after the manuscript was purchased by Simon & Schuster, with the understanding that I would create the show. I was partnered with a wonderful show runner and we are (finally) in the process of pitching the series to networks. I’ve come up with some interesting ideas to differentiate the show that are in tune with the genre and vision of Deep State, so I’m excited about its prospects.

We’ve discussed casting ideas, but I once heard another author respond intelligently to this same question about who did he see playing his franchise character. From experience, he’s learned to avoid his fans’ disagreement or disappointment in casting preferences … by pleading the Fifth! Whoever is in each particular reader’s imagination is fine by me.

Q. You’ve said elsewhere that Hemmingway was one of your early inspirations. What modern writers make the cut of unputdownable authors? And, related, if you could grab a beer with any writer you haven’t met yet who would it be?

Chris: I’ve had several literary idols along the line. Hemingway was a first. Then I had a Celine phase, followed quickly by a Malcolm Lowry jag. In college, it was all about Charles Bukowski. After college, while I was in NYC and trying to be a playwright, I had a severe thing for Sam Shephard. One of my biggest commercial influences is Elmore Leonard. Of late, I’ve enjoyed Lee Child, Lou Berney, and Don Winslow.

I like to read outside of the genre in which I write, with the ambition of bringing in new ideas, techniques, and voices. As for the second question, I think James McBride would be a pretty cool hang.

Q. On your website you’ve tagged yourself as a Hollywood Refugee, despite a filmography of at least six movies. But what was your greatest disappointment in the LA screenwriting scene?

Chris: Man, that’s more than a paragraph answer. Every one of my produced credits were from scripts that derived from someone else’s idea or story (more or less.)  Except for Never Back Down, which was an original screenplay, they were jobs that were obtained because I had written an original screenplay that garnered some attention but never got produced. So, in answer to your question, the biggest disappointment for me personally was having so much difficulty realizing my visions.

And that frustration is exactly why I’m enjoying this transition to writing novels. No one tells me what I can or can’t do. The characters and stories I create are delivered directly to the reader, without alteration. That’s fantastic! Though I still keep one foot in the film and tv world, I very much consider myself an author first and a screenwriter second. It’s my intention to write for Hollywood only if it’s adapting my own books.

Q. Deep State is great in large part because of Hayley Chill. She’s extraordinarily capable, sometimes treated unfairly, and persevering against the odds. What makes a character relatable?

Chris: I wanted Hayley Chill to seem as much like an everywoman as is possible, while still maintaining the vision of her prevailing in heightened situations. That’s a tricky and fine line to walk. I’ve never been much of a comic book or super-hero guy. I’m more interested in real world issues, especially when it comes to my characters. I want the problems that they have to be shared with my readers.

The situations created in my books are much different than that kind of relatability. I’m into speculative political thrillers. But to keep those plots grounded, I endeavor to draw my characters – and the problems Hayley might be facing apart from the Big Bad of that particular book – in ways that must be sympathetic of the reader.

For instance, in Deep State, one of the villains is in the process of trying to find and buy a house while engaged in his nefarious plot against America. I like that kind of juxtaposition: big and small problems as simultaneous challenges. Does that make sense? As far as there being differences between genres when it comes to character, I don’t really think so. Good writing is good writing across all genres. I guess the same can be said for bad writing, too!

Q. We’ve got to talk twists. At the end of Deep State you’ve got a big one that I’ll say no more about. What are your thoughts on twists? And can we expect twisty business in Savage Road?

Chris: I think twists are a valuable way to engage the reader and hold his/her attention in an increasingly distracting world. At the end of the day, I want my books to be an energetic read. The prose should pop. Characters must be unique. And the plot should crackle. Three decades of writing for the film industry ingrained in me a desire to surprise the reader in every way.

But, yes, it’s possible to overdo twistiness. Writing is all about having a sense of pacing and structure. Nothing should seem forced. Every element must be organic and working in harmony with all the other narrative elements. If something doesn’t ring true, the author is screwed.

And, yes, things are rather twisty in Savage Road. That wasn’t so much intentional as how the story built out in the outlining phase of the book’s creation. My ambition is for a reader to feel something when reading my books. Both emotions and surprise.

If you’re able to achieve that much (no small task), an author will have readers who recommend the books to friends. Word of mouth! Best-selling authors are never manufactured, as artists in the music or movie businesses might be. The readers themselves are responsible for generating mega-best-sellers.

Q. Congratulations on Deep State coming out in paperback today, and Savage Road in January. What are you working on next?

Chris: Thank you! I’ve finished the first draft of book three in the Hayley Chill series and will be delivering the manuscript to my editor by the end of this year. If we manage to sell the tv series, I’ll be busy with writing the pilot for that in the early part of 2021. I have early thoughts regarding what book four will be about and need to do some research for that. And I have a first draft of a whole new series sitting in my drawer, waiting for the first chance I have to bring that one to life. I’m busy, which is great!