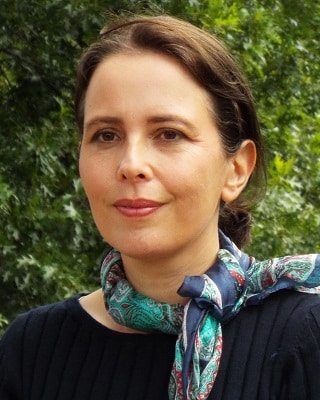 Megan Goldin is the bestselling author of The Escape Room and Night Swim. Her books have been praised by news outlets from The New York Journal of Books to the Toronto Star, and authors Lee Child, Harlan Coben, Sarah Pekkanen, and many more.

Q. You’ve said elsewhere that The Escape Room was partially inspired by a job interview you underwent. What was the interview like?

Megan: After having my third child I moved to a new country and I was looking for a job during that vulnerable period when my youngest son was still an infant. I had a job interview and throughout the interview the hiring manager crunched noisily on snack food every time I answered his questions. He chewed and crunched so loudly that I could barely hear my own voice.

It was obvious that he had no intention of hiring me. Perhaps he was required to interview a woman for the role or a certain number of candidates because it was quite clear from the very start that he was only going through the motions of interviewing me. It made me feel incredibly powerless because it didn’t matter how well I answered the questions or how experienced I was for the role, I had no chance of getting the position. I later discovered that he hired a friend for the role. When I wrote The Escape Room, which is a corporate thriller, I used a fictionalized version of that anecdote in the book to highlight the powerlessness of my main character Sara Hall.

Q. Sarah Pekkanen, Lee Child, Harlan Coben, and other thriller giants have praised your writing. What are your secrets to creating books that even the best describe as electrifying, gripping, and unforgettable?

Megan: I am in the Lee Child school of writing in which I don’t have much of an idea about my book when I start writing it. I don’t have an outline or character sketches or any of the detailed plans that some writers might have before they start writing. I have nothing more than the kernel of an idea. Once I start writing, magic happens; characters come alive and they lead me through the story. Perhaps my books are so suspenseful because I – the author – don’t often know what’s going to happen next!

Q. How do you think writers should approach building psychological thrillers, compared to other genres like mystery or crime?

Megan: At the end of the day, any novel is about telling a story. In the case of psychological thrillers, it’s about suspense and creating a constant tension while the story is told. Thrillers are about getting readers’ hearts beating fast, and keeping them turning the pages. It is pure entertainment. Beyond that, though, thrillers and indeed crime novels are an incredibly popular genre because they strip bare our society and reveal the ugly dark side that we all know is there.

Q. How has your work as a journalist and experience as a one-time TV producer and radio reporter impacted your writing?

Megan: It has given me discipline to keep writing and to meet deadlines and daily word counts. Discipline is a very important quality for any aspiring novelist. It doesn’t matter how great a writer’s ideas might be, if they can’t get those words on paper then there will never be a book.  There are other aspects as well. Journalists are persistent and that’s another quality that is important for any aspiring novelist because it’s a very tough industry to break into with a lot of rejection so persistence is crucial. Beyond that there is the actual craft of writing. As a  reporter, I spent years writing news and feature articles under tremendous deadline pressure so it’s a terrific training ground for what I’m doing now.

Megan: I’ve just finished a new novel. I won’t reveal any details yet as I’m not yet sure if it’s worked. It’s a  noir-style novel. It was a lot of fun to write but also very difficult because of the nature of the book’s structure and because I wrote it over the coronavirus outbreak. Aside from the stress we all have during this surreal time, and my obsession with watching the news which has caused a constant distraction, I’ve had all my kids home for the past seven months.  I’ve had to write late at night to accommodate their home schooling schedules so it’s been a struggle as I am sure it is for many other parents across the globe.

I’d love to write another novel with Rachel Krall. She’s one of my favorite characters and I’d love to see what happens next to her.

The historical suspense author on his upcoming RHAPSODY and more

END_OF_DOCUMENT_TOKEN_TO_BE_REPLACED

The debut author on pseudonyms, screen deals, publicity, and more.

END_OF_DOCUMENT_TOKEN_TO_BE_REPLACED

The award-winning author on accolades, Napoleon, and more