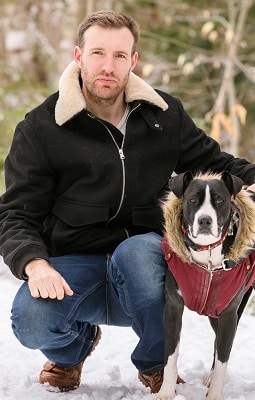 Q. Your writing is often described (very positively) as character driven. What helps you write deep characters? What do you want readers to get out of your characters?

Owen: I hope to give readers characters who are fully fleshed-out and three-dimensional: “good guys” who aren’t 100% good, and “bad guys” who aren’t just completely evil. In the case of the antagonists in particular, I want the readers to be able to at least understand why the character has taken their particular path and why they’re committing the crimes that they’re committing, even if we can’t condone the behavior. Ideally, the reader should be able to see a little bit of themselves in the antagonists; you want the reader to feel aware of the knife edge that separates a law-abiding citizen from someone who’s turned to crime.

I tell aspiring writers that a simple story with complex characters is always better than a complex story with simple characters. If you can create deep characters on both sides of your conflict and set them in a situation where the stakes are high and the reader is actively invested in everyone’s survival, you’ve got the makings of something good. Some of my favourite letters from readers are from people who are mad because they were rooting for the bad guys when justice caught up for them, or who connected with a kind of minor character and something about that person really resonated with them. So character work, to me, is so key when it comes to telling a good story.

Q. You’ve written successful young-adult and adult-audience thrillers. What are some of the biggest differences on your approach? Could you simply remove a few curse words or scenes and turn any book into a YA novel?

Owen: Ha! Ironically, my YA novels probably have more curse words—and racy scenes—than my thrillers. I think the approach is totally different, and that’s why I enjoy having YA as a kind of pressure-release valve between thrillers.

It comes down to knowing what you want to give your audience, I think; with my adult-oriented thrillers, I’m trying to hook the reader with a page-turning story that will keep them entertained on, say, a flight across the country, but I’m not trying to be too clever and make language and stylistic choices that will distract from the story itself. I want the plot and the characters to carry the day.

Writing for young adults, I think a lot of the fun is that you can be clever, and snarky, and kind of poke fun at conventions of your genre, and tropes that you’re leaning on, and stuff like that. If you read my YA stuff, it’s stylistically insane; there are words scattered everywhere on the page, the narrator is constantly breaking the fourth wall, and there are, again, probably a ton more bad words and *adult* situations.

The trick is that you can’t pander to young readers; you have to meet them on their level. So you can’t censor yourself. And my goal is to create a kind of subversive bond between my narrator and my YA reader, where the reader feels like they’re in on a secret when they’re reading my books, like they’re experiencing something unique that maybe their friends aren’t, that maybe adults wouldn’t get or approve of, that sees the world in a similar way as they do. Style and voice play such a big role, for me, in YA fiction, and I lean on them so much to augment my stories and characters in a way that I don’t think would necessarily fly for readers of my adult thrillers.

Q. You’re a Canadian who sets your books generally just on the other side of the border. Besides obviously appealing to the larger American audience, what do US settings offer that Canadian settings don’t?

Owen: Well, you nailed the first big benefit of American settings, which is readership. As a Canadian, it’s much easier to succeed in the arts if you can tap into the American market, and with a few obvious exceptions (cough, Louise Penny), Americans are typically reluctant to read stories set in Canada. So I’d be lying if I said that wasn’t on my mind when I set out in this business.

Beyond that, having grown up a stone’s throw from the American/Canadian border near Detroit, it felt natural to set my stories on *that* side of the fence, rather than the Canadian side. It’s not that we don’t have crime up in Canada, or that my stories wouldn’t work, but I think the idea of the American Dream and that anyone can make it if they just work hard enough and scrabble to take what they can get can lead itself to a kind of desperation, and that desperation can often be justification enough to turn to a life of crime.

My favourite criminals in fiction are the ones who feel as though they’ve been betrayed, let down or ignored by society, and that they’re owed something that just hasn’t been given to them. Or that they *need* to commit crimes just to keep up with this idea of what a normal American life ought to look like. I feel like there’s a lot of pressure to be upwardly mobile and conspicuously wealthy in American culture, and I’m fascinated by how that might affect the psyche of someone who might tend toward crime.

Q. In your early career as a journalist you covered Poker. What did that world teach you about humanity, tension, emotions, or anything else that informs your thrillers today?

Owen: Well, I got a first-hand look at desperation, that’s for sure. And how unscrupulous people can be in the pursuit of the almighty dollar.

I mean, I was twenty-three when I got that first job in poker, and I’d never traveled outside of Canada and the United States. I was thrust into this world of professional gamblers, of just utterly unfathomable wealth, of addiction and greed and spectacle. I think I learned pretty quickly that money and fame and material success aren’t in any way reliable metrics of a person’s fundamental decency, and also that proximity to money plus a certain level of desperation can lead a person to do things they might not have ever imagined they would.

It was an eye-opening experience, for sure. I met a lot of kind, generous people, and I met a lot of degenerates, too. I saw wealth and immense luxury, and I saw the opposite. And I think it exposed me to such a wide range of people in so many stages of their lives that even if I don’t write explicitly about gamblers and poker rooms in my novels, the job gave me such a wealth of experience to draw on that as an upper middle-class kid from Canada I might never have seen before.

It certainly broadened my sense of what a person will do for a dollar, and just how many people in the world are out there to get themselves paid, regardless of the consequences to those people around them.

Owen: I’m just putting the finishing touches on the third draft of a standalone thriller, although with COVID I’ve not been as productive as I’d hoped for the year. I’ve also done a number of long-haul rescue dog missions this year, which involve driving my truck a few thousand miles across rural Canada to help transport 15-20 at-risk dogs for a local rescue agency. So that’s cut into my writing time!

When I’m finally done, I’m planning to break ground on the third book in my Deception Cove series, which is partially inspired by those rescue missions and might send my main characters, Jess and Mason (and Lucy) out of Makah County for a spell. And I have a YA book, The Wild, due out in January and set to be released on HBOMax as well, so I’ll be prepping for all of that.

END_OF_DOCUMENT_TOKEN_TO_BE_REPLACED

The NYT bestselling author on AMERICAN TRAITOR and more