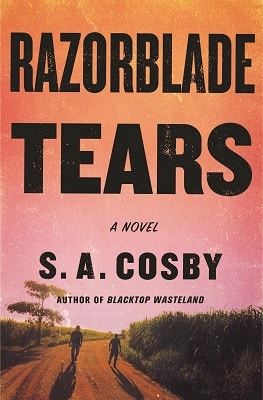 Author S.A. Cosby delivers a powerful sermon in Razorblade Tears – a message of fire and brimstone delivered in his distinctive, crystal clear voice. A promise of justice to the weary, the wronged, the misunderstood.

And he delivers it through a brilliant characterization of the proverbial odd couple: a black father and a white father, both ex-cons whose sons found love and happiness with each other only to have it taken away by gay-bashing killers who blasted their faces into oblivion, leaving them lying in a pool of their own blood on the street like yesterday’s trash. Both fathers, who had abolished and severed all ties with their sons when the boys came out of the closet, are drowning in painful tears of regret, guilt, shame, self-hatred, and a world of what-ifs. Hindsight is 20/20. It’s too late to make amends with their sons—they’re lying in the cold, hard ground, and their case has been shelved as a “cold case.” But Ike and Buddy Lee weren’t born yesterday. They’re seasoned old timers who’ve been around the block a time or two . . . a prison block where the weak fold and the tough reign supreme. And yet, both survived. Left with a mountain of regret and a burning rage for justice for their boys, Ike and Buddy Lee dry their river of razorblade tears and team up to dole out some old timey southern justice. The story that unfolds is graphic, explosive, cinematic story-telling at its finest.

I’ll admit to being leery of starting Razorblade Tears . . . after all, there’s no way it could come close to Cosby’s masterpiece Blacktop Wasteland, right? Wrong. Cosby has outdone himself by doing what he does best — keeping it real. He doesn’t mince words or spare feelings or worry about what’s politically correct or who he might offend as he renders a graphic story of two fathers drowning in a river of grief and regret. Two fathers who claimed they were not prejudiced while shaming their sons for their sexual orientation. Two fathers who severed all ties with their own sons — committing the ultimate betrayal of prejudice within family units. Two fathers with a hard lesson to learn — love is love. All the rest is packaging.

Razorblade Tears is crime fiction as raw, gutsy and hardcore as it comes . . . definitely not for the faint of heart. As a reader, I found myself wiping tears while cheering these two hellions on through the twisted, action packed plot to the explosive, cinematic conclusion. Images explode on pages soaked in blood, gore, guts, tears – a visual experience down the road to hell, crying out for the big screen. But, if you read your way through the heartbreak and violence, you’ll discover an undercurrent of hope for a brighter future, for redemption, be it on earth or beyond. A sermon delivered from the pulpit and pen of Author S.A. Cosby to all back-row church goers who refuse to see or hear or believe.