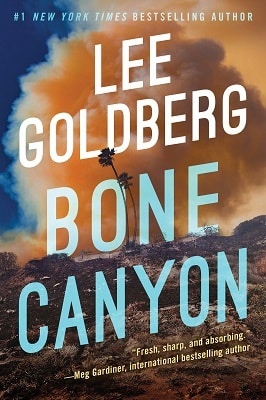 Lee Goldberg is back with the second novel in his Eve Ronin series, which pulls the reader into two parallel cases when bones are discovered after a major brush fire ravages the area. Both cases tug at the heartstrings, but for different reasons, leaving the reader to guess what the killers might have been thinking. Quick paced and easily devoured, this is perfect for those who love gritty police procedurals.

Eve Ronin has had quite the rise through the ranks of the Los Angeles Sheriff’s Department. Videos of her gritty antics hit social media and she earned quite the reputation for herself, something that others within the LASD have been holding against her. With little interest in capitalizing on her fame, Ronin is forced to rebuff those in the industry who see stardom and an easy television career based on her life.

When Ronin and her partner are called out to a recently fire-ravaged area, they discover part of a skull. Some slow and thorough investigating by a forensics anthropologist not only offers up a lead as to who the victim might be, but also reveals much of her skeletal remains, scattered around the property. Ronin begins piecing it all together and identifies the victim as Sabrina Morton, with the help of a surgical implant.

While Ronin chases down some people who may be able to help piece together what Sabrina was doing in the days before she died, she learns that there were some horrible things that befell this young woman. Sabrina and her roommate went to party on the beach and were gang-raped by a bunch of surfers, all sporting a similar tattoo. After Ronin is able to get hold of a sketch of this tat, she learns that it’s a common mark worn by many of the sheriff’s deputies in the area. Could Sabrina have been attacked by off-duty officers and killed to keep her silent?

While working various angles, another set of bones turns up, those of Debbie Crawford, a fifty-something woman who has a long-standing beef with her rich neighbor. Ronin begins to look into this case and sees the feud has been building, such that having her killed would surely have eased the headache that was developing across the fence line. Still, there’s something not entirely kosher with the way things are presented to her, leaving Ronin to open new lines of inquiry.

As Ronin begins accusing deputies of rape and likely murder, she becomes more of a villain than she is already, leading to verbal and physical attacks. Yet, Ronin refuses to back down, sure that she should be seeking justice over covering her own backside. Two killers are out there and they must be brought to justice, even if it costs Ronin her badge, or worse!

Lee Goldberg proves again that he is a master storyteller with this piece. His ability to develop strong plots and use a fast-paced narrative keeps the reader on their toes as things progress. Poignant characters also help keep things enthralling until the final reveal for the attentive reader.

Eve Ronin remains a relatable protagonist, even though she is young and still somewhat naive when it comes to priorities. Her backstory pops up throughout the piece, though it is how she handles it that prove to be an entertaining subplot. Gritty and seeking to make a difference with her badge drives Ronin to do what she feels is right, even when she steps on toes to get there. With a peppering of some personal interactions at key points in the story, Goldberg has crafted a character that will definitely remain highly entertaining for as long as the series continues.

The cast of strong secondary characters keeps the reader wanting to learn more. Each complements Ronin in their own way, though there are some who are able to stand alone and provide entertainment value in how they are portrayed. With some returning faces and a number of one-offs, Goldberg keeps his story moving with all the banter throughout, offering up many suspects for these two murders and forcing the readers to point at those they would accuse.

The premise of the piece is not only strong, but highly engaging. The plot moves along at a quick pace, thanks to a strong narrative and clipped dialogue. Goldberg has a lot of practice in the genre and it shows, keeping the reader wanting more with every turn of the page. Short chapters that propel the story forward keep the reader on the edge of their seat until everything comes together at the end. A highly entertaining story in a genre that is quite full of cops and their hunt for the elusive suspect or killer.

Kudos, Mr. Goldberg, for another strong effort. I cannot wait to see what else you have in store for your fans in the near future.

Editor’s note: Bone Canyon was selected as one of our 2021 best books of the year.