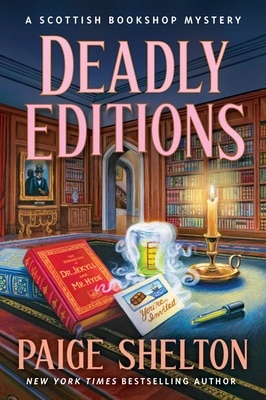 What could be more fun than a treasure hunt? And what if the prize was a marvelous private library collection? And what, if in addition to that, all the contestants were awarded a large sum of money just for playing? Tempting?

Well, Edinburgh bookshop owner Delaney Nichols receives an invitation to participate in this treasure hunt via a mysterious delivery person. Delaney is one of just four people to get such an invitation by the elderly, eccentric and wealthy Shelagh O’Connor.

Once she arrives at the O’Connor estate she is overwhelmed by the size of the library, as well as the object of the treasure hunt: a rare edition of Robert Lewis Stephenson’s classic, The Strange Case of Dr. Jekyll and Mr. Hyde.

O’Connor, a spinster, is obsessed with this book. so much so that in her youth she used to dress up and prowl the streets of Edinburgh as Mr. Hyde. It got her in hot water once, but will the present imitate the past?

Once the hunt begins a “New Monster” seems to begin roaming the streets of Edinburgh and there are Monster sightings, a rash of burglaries, and even a death. Who is to blame, who is the monster and is Shelagh O’Connor a prime suspect due to her past eccentricities?

Delaney is on the hunt for clues, and each one seems to lead to a different pub in the city. Along the way she begins to uncover hints about O’Connor’s past until one day O’Connor is kidnapped, and her cousin is left a bloody mess by the attacker. Now the police and Delaney shift into high gear in their search for clues and to unlock the mystery identity of the Monster. Despite the treasure and the cash prizes, the race is on to find Shelagh and hope that the Monster has not taken the life of another victim.

The police are baffled, the clues seem to be impossible to follow, and all the while every person who knew or worked for O’Connor is a possible suspect.

This is a well written novel, one that keeps the reader guessing until the very end of the book and makes us wonder if there is not a little of Mr. Hyde in all of us. The book features the pubs of Edinburgh, believable characters and a very interesting plot. While being the sixth in the series, this certainly can be read as a stand-alone mystery and is an enjoyable novel for all mystery fans.

She leaves the big city for a small town, but gets caught up in revenge

END_OF_DOCUMENT_TOKEN_TO_BE_REPLACED

Not even the luck of the Irish can fix murder