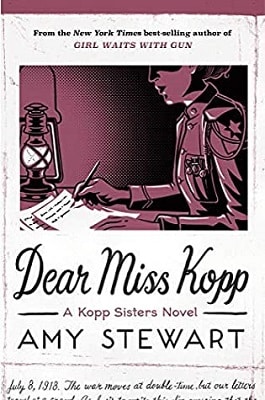 Although this series started with a novel based on the experiences of the real Constance Kopp, the first woman appointed a US Deputy Sherriff in 1914, it has now gone on beyond the end of her duty with the Sherriff’s Office to continue imagining her life and those of her sisters. In this sixth book of the series, it is now 1918, the USA is at war and the sisters are all playing a crucial role, each in her own inimitable way.

From Constance’s obituary, the author discovered that she was involved in intelligence work for the government during WWI and so has created a fictional role for her in the Bureau of Investigation, looking out for saboteurs and spies in actual Bureau cases. Her sister Norma, who raised and trained messenger pigeons, has been sent to the US messenger pigeon school in the small French village of Langres and younger sister Fleurette is touring the USA with May Ward’s cabaret act, entertaining troops who are about to embark for France.

The novel is written in the form of lively letters between the sisters, as well as from Norma’s roommate, nurse Agnes Bell, who fills in the many gaps left by the taciturn Norma, describing the local village, and bringing the realities of war home through her experiences in treating injured servicemen. When Agnes is accused of stealing supplies from the hospital, Norma steps up to show that Constance is not the only detective in the family, by carrying out her own investigation to find the real thief and uncover an enemy plot.

The letters between the sisters and Agnes are warm and intelligent, often infused with quirky humour as they describe the various situations in which they find themselves. The letters are enriched by excellent historical research into many aspects of life for both men and women, not only serving overseas during the war but also at home. Fleurette runs into trouble with the zealous committee charged with policing women’s moral behaviour in America while Constance is concerned by the overly enthusiastic volunteers of the American Protective League who seek out spies and men shirking registering for duty in the armed forces. Norma has her own battles with misogyny and disparaging treatment by men in charge in the army.

This is an excellent addition to this well written and researched historical series and is highly recommended. Although the novel reads well on its own, reading the earlier episodes is recommended to really get to know these delightful characters.

With thanks to Houghton Mifflin Harcourt and NetGalley for a copy to read. Publication January 12, 2021.

END_OF_DOCUMENT_TOKEN_TO_BE_REPLACED

Deaths, disappearances: Someone, or something, is haunting the Titanic