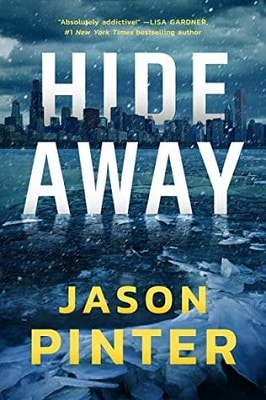 She calls herself Rachel Marin, but that’s not her real name. Something happened years ago that’s sent her fleeing with her two children. Whatever it is, the threat is real and ongoing, forcing Rachel to stay hyper vigilant, while living just outside of Chicago.

After the Ashby PD come to the scene of a body found on the ice below a bridge, the first thought is suicide. Things must have been going wrong for the victim—a hunch substantiated once the woman is identified as former mayor Constance Wright. Her fall from grace, like this leap from a bridge, was anything but graceful.

While watching the news the following morning, Rachel Marin sees the story and reports that this was a murder, citing the physics of the event, impossible to replicate by a suicidal jumper. Intrigued, two homicide detectives take her information under advisement and commence their own questioning. When Marin appears at the home of the victim’s ex-husband, she worms her way inside and finds additional clues that point to a potential suspect. While the information is welcomed, Marin’s presence is not. She’s told to steer clear.

As the police investigation gains momentum, it’s soon apparent that there’s more to Constance Wright than meets the eye. Her downfall came from an apparent affair with a staff member, but he admits under questioning that he was paid to fabricate it. Marin is trying to work the angles and provide a pathway for the police without stepping on any toes. All this, while balancing two children who are at completely different levels of acceptance of her sleuthing.

When Marin appears on the scene again, her involvement crosses the line one too many times and she’s taken into custody. It’s now time to look at Marin, not as a suspect, but to determine who she is and why she has such a connection to the case. Background checks turn up glaringly empty and the cash purchase of her current home raises red flags. She’s a mystery without a past.

Constance Wright’s killer is out there, unknown. And it’s time for Marin to take action, or wait for another body to appear. Maybe her own.

Hide Away is unlike many I have read in the thriller genre. With a strong narrative that evolves throughout, Pinter hooks the reader in the early chapters. Flashback chapters fill in some of the Marin gaps, while still keeping the reader in the dark as to what’s really going on. Chapters not only alternate in time period, but also with their length. This keeps the reader on their toes, never knowing what’s to come or how detailed the analysis will be. Great banter between characters and a stellar plot with a handful of nefarious characters provides something for all readers to enjoy, while trying to peel back the ‘whodunit’ portion of the story. I cannot wait to get my hands on the sequel to see if it packs just as much of a punch.

Kudos, Mr. Pinter, for a great start to a series. You found a definite fan in me, which leaves me wanting to read more of your work. An amateur sleuth mystery and police procedural with a twist, Hide Away will appeal to fans of the genres, as well as the reader looking for something across numerous timelines.