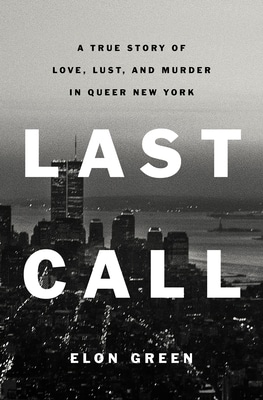 There’s nothing better than a riveting piece of true crime, especially when it’s written by someone who can artfully present the story. Elon Green does well with Last Call, where he explores the murder of a handful of men whose connection to a gay bar in New York City eventually led to locating a killer no one suspected. Full of great descriptions, both of the victims and the LGBTQ+ scene in New York in the 1980s/90s, Green keeps the reader wanting to know more until the final reveal. Likely a piece true crime fans will want to add to their collection.

It all began with the discovery of a dismembered body along a Pennsylvania highway. When the authorities discovered the body, cut into pieces and bagged multiple times, they knew this was something that needed their undivided attention. With the help of some identification, found in a trash can up the road, the search began to better understand the victim and why he might have been targeted.

Green explores the victim and his ties to the LGBTQ+ community, which he colloquially calls the ‘queer scene’, and some of the local establishments in the early 1990s. This was at a time when gay rights were still not prominent and the police had less respect for an overall protection of citizens, no matter their orientation. There was also a comprehensive discussion to the ‘secret life’ lived by the victim, likely part of the veiled persona gay men presented at the time, while also holding down a job in a profession where homosexuality was not as accepted.

When a man is found killed and dismembered in New Jersey, officials are equally as baffled, but also quite intrigued at the attention paid to dispose of the body. This was not a simple slash and dump, but a detailed understanding of the body and how it is ‘assembled’, thereby providing key steps to cut and properly package a body before leaving it to be collected. The authorities noted this attention to detail could only have come from someone in the medical profession, or with access to the various tools.

Green circles back to explore gay rights and the LGBTQ+ scene in the early 1980s, particularly in the early years of HIV/AIDS. The detail offered about how medical professionals were downplaying it and then labelling it as a disease of homosexuals offers the reader some insight into how the community was treated and branded by the larger American society. Green depicts this so well and keeps the reader wondering as he slowly discusses progress and the emergence of gay rights amongst local and state politicians.

Green comes around to explore how one man’s long history of luring and attacking gay men as far back as the 1970s played a role in the identification of a person of interest. The meticulous planning and playacting to lure victims to his home helped to create a sense of calm, only to be destroyed after drugging and attacking these men. While the ending came together quickly in the final few chapters, the reader can see how a single lead, in the form of an expunged record of forensics, brought the case together, providing a temporary sense of relief to those who felt themselves constant targets.

While I am not a regular reader of true crime, I can respect those who enjoy the genre. Elon Green does a decent job of piecing together the story and filling in many of the gaps he discovered in news coverage. Many of these cases are from close to three decades ago, when reporting was less thorough and not as easily accessed. As Green stresses throughout, it was also a time when ‘gay crimes’ were seen as more ‘unfortunate events’ than being on par with those of the heterosexual community.

While discussion of the crime scenes was great (who does not like to hear how the body was discovered in eight layers of bags?), it was the social commentary on gay rights and the HIV/AIDS situation in New York that had me quite intrigued. I wanted to see how things would progress and how little was done at a time when America (and much of the world) was still trying to come to terms with violence against some, while the authorities did nothing. Green effectively presents the struggles and issues with class, educating the reader throughout the book.

Green writes very effectively and efficiently, providing the reader what they need to understand how things fit together. There is some great social commentary on the legal acceptance of gay rights and how hate crimes were slow to catch up, all while HIV/AIDS became the face of the LGBTQ+ community. With chapters that vary from overviews of the situation to highly detailed, Green offers the reader what they need, told with a strong narrative that pushes the story along.

If I had to find a downside to the book, it would have to be the abrupt end to things. The last few chapters became more of a halting train than the smooth ride that the book presented beforehand. Once the killer’s identity became known, it was a rush through the legal process and the reader was left to sigh that this was not added to a pile of cold cases. Green’s great build up seemed almost trumped by that anti-climactic end.

Kudos, Mr. Green, for an interesting look into this series of crimes. I will have to see what else you’ve penned that may be of interest.

Six teenagers dead and the killer behind bars, but the games are just beginning

END_OF_DOCUMENT_TOKEN_TO_BE_REPLACED

A reporter chases down a serial killer terrorizing Chicago

END_OF_DOCUMENT_TOKEN_TO_BE_REPLACED

The brooding waters of the Kent coastline offer an ominous backdrop