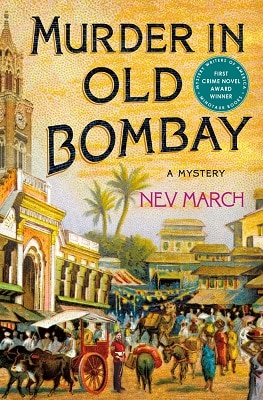 Our mystery starts with a suspected double-suicide. Two young women seem to jump from the university’s tower in Bombay, though all seems quite shady.

As Captain Jim Agnihotri reviews the case in his hospital room in Pooma, where he is recovering from wounds suffered on the northern frontier, he puzzles over the case and the pieces he puts together don’t make any sense. Just as his idol, Sherlock Holmes, might deduce, the Captain believes these deaths are more than meets the eye. What would Holmes think and do as he recovers from his injuries?

Adi, the husband and brother of the victims, approaches the Captain and enlists his help for he too, believes the ladies did not kill themselves. Jim then finds himself embroiled in a case that will test his wits and his reliance on the keen advice found in the books by Sir Arthur Conan Doyle of his idol detective.

The Framji family, a wealthy family, is anxious to know the truth, and Jim is on the trail of many nefarious characters. A special letter is foremost on their minds, and these bad guys will do whatever is required to obtain it.

While becoming closer to the family, Jim meets the beautiful Lady Diana Framji, sister to Adi. Their mutual attraction is strong but Captain Jim is half British and half Indian, so he is considered inferior and no match for Lady Diana. Still, she joins Jim in his pursuit of the truth placing herself in danger, but also showing a cunning that endears her further to him.

Was this a double suicide or were the ladies murdered by the dark forces that seem to swirl around the family and the times they live in? What is so special about this letter? And could it be the one thing that gives this case direction? Will Diana and Jim learn the truth as they find themselves becoming more enamored with one another?

Based on an actual event, the story paints a wonderful revealing background of colonial India with all its environments and visual beauty. Nev March does a fine job with the background as well as the characters which she portrays against the lushness, the beauty, riches, but also the sordid parts of India of the 1890s.

Thank you to Nev March, Minotaur Books, and NetGalley for a copy of this convincing tale due out on November 10, 2020.

END_OF_DOCUMENT_TOKEN_TO_BE_REPLACED

She delves deep into the lives of two missing girls