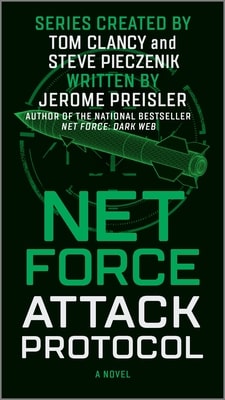 Sometimes we try to pretend we live in a little bubble, not paying attention to all that goes on around the world. And then you have authors who write with such in-depth clarity, the stories they tell seem to come straight from the headlines. While classified as fiction, sometimes we wonder if it really is.

Net Force: Attack Protocol is the third in a series of books about a new division developed specifically to counterattack cybercrime at a governmental level. The author starts with a bang and the action never stops.

The president’s new cybersecurity team, Net Force, must undertake two perilous missions, one in Moscow and one Central Europe. The missions are completely unconnected. Or are they?

The first, is against a known player in cyber warfare. Here’ the Net Force team heads right into his fortress, a direct assault. Highly detailed, fast and furious action ensues, that is both gruesome and gritty. The chase is on.

The second attack is against the base camp itself where someone has hacked the computers that run the mechanical guards protecting the perimeter. Now it’s Net Force’s turn to be hunted. And the hunters shoot .50 cal ammo at incredible speed, resulting in complete decimation of persons and property. The reality is almost unbelievable and the action is smartly played with high intensity and suspense.

The Bottom Line: Don’t look for closure in this book, as it’s just one in a series. Now we can only wait for the next installment, and for the next step in this mission of cybercrime and attacks in a world where it gets harder and harder to track who is behind the madness.