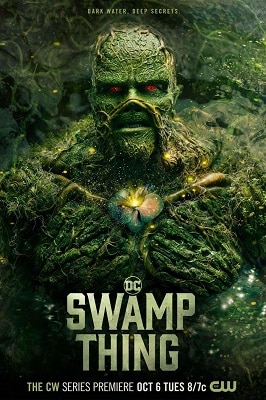 Swamp Thing was one of the original shows to be released on the now defunct DC Universe, (Now moved to HBO Max), alongside the successful Titans series. This show, however, suffered a different fate, cancelled just a week after the premiere aired and cut from 13 episodes to 10. Considering the positive word-of-mouth that was around set at the time and the fact it had been planned for three seasons and a potential Justice League Dark spin-off, this was very unexpected.

But like all shows in the modern era, just because it was cancelled by DC doesn’t mean the show will never return. It originally aired in May – August 2019, but the CW network aired the show weekly just last year concluding on December 22, 2020. There have been preliminary discussions around continuing the series, but nothing concrete is presently in the works.

Before I sat down to watch Swamp Thing I thought I knew what to expect. But it blew me away in terms of the visuals and CGI, and the thought that went into the show around story and character development. With a strong cast including Crystal Reed as Abby Arcane, Virginia Madsen as Maria Sunderland, Will Patton as Avery Sunderland, and Kevin Durand as Jason Woodrue, I think the show has enough ‘star’ power to warrant another few episodes at least. The issue will most likely arise in CGI / budgetary constraints for a network such as the CW. But who knows? They may reconsider depending on how well the show performed for them over the past few months. As always, anyone who has read from me before, we need to start breaking down this show a bit further.

Following an incident of a green flu-like virus popping up in the town of Marais, CDC doctor Abby Arcane returns to her hometown in an effort to understand the disease, stem its spread, and close off a chapter from her youth which she ran away from 14 years ago. Upon her return, we get to see the effect that the local swamp is having on its residents and everything that the general population has been doing to this nature reserve. Between polluting the water and destroying the trees with an accelerant in an effort to create more land for the population and businessmen, the ‘green’ found its way to fight back after an incident involving scientist Alec Holland. This results in the creation of the Swamp Thing which occurs after the fast-growing plant species comes into contact with the injured man giving rise to the mysterious figure that we come to see over the course of the show.

As he begins to wage a fight between the ‘green’ and the ‘darkness,’ we come to see the subtle ways in which humanity affects the world around us in both positive and negative ways without even being cognizant of the roles we have to play. This leads to tension between Abby and those around her as she seeks a way to solve the issues seen in the swamp and any of the diseases that are finding their way out of it and into the people surrounding.

The show moves through at a fairly quick pace for its 10 episode arc and it is easy to see that a second season would have been welcomed for the characters to develop more of their backstory as somethings were missing during this run. We got to see who looked after Abby in her teenage years and what happened with her old ‘sister’ Shauna, but we don’t know what happened with her mother, or how she ended up with the Sunderlands in the first place. This all leads to the show being viewed as quite a solid mystery story. Considering it is a DC property, it may have suffered from being marketed as more of a ‘superhero’ story rather than being a standalone story that fits nicely into other genres.

The story is very intriguing and captivating while also having the ability to give the audience the chance to speculate as to how holds what cards and what characters overall motivations could be. Between those who have gone to this small town, those who returned, and some who have never left, everyone has an angle to play and a secret they want to keep.

I don’t usually speak about genres when it comes to reviews of tv shows, but I feel for something like this, it is needed. The show comfortably falls into many categories making it a show that more people need to be aware of. Since it received its marching orders after just a single episode, it is hard to know what the studio was thinking: they had a show on their hands that is capable of being suitable for just about everyone out there. We have a redemption story for the Swamp Thing, the mystery of a small town, and a series that can be quite dark.  Maybe some of it could be classed as having horror elements. (I don’t necessarily agree with this aspect of it, but it had been mentioned to me by others who watched some of the episodes). This is something that was clearly overlooked by the marketing team of DC Universe when they were trying to get fans to sign up to yet another streaming service.

As everyone knows from watching tv and films, in a small town when someone returns home, there are stories to be told and secrets to be kept and this is no different. With the introduction of Abby and the Sunderlands we come to understand that they had a daughter who died years previous, and there seems to be some portion of blame attributed to Abby by surviving parents. Considering we only know Abby at this point as a doctor who has saved lives and takes human life very seriously wishing to keep those she cares for alive, and not risk caregivers, this sets up a mystery that unfolds during, getting some resolution by the time the finale rolls around.

With the themes of sustainability and corruption, we come to see the role that mankind has to play with saving the world we inhabit. The swamp had a small presence prior to Alec’s death, but once it was able to establish itself in a person, it created a defense mechanism that was able to fight for it and create a better outlet for its safety.

By the time we come to realize what has been polluting the swamp and why, we get caught up in the usual small-town dramas, that no matter how often viewed, will always be interesting. This is driven home thanks to the performances of people like Patton and Madsen, who are able to make you feel as if you care for them.

In the opening scene of the show, we are thrown straight into the swamp, and we spend time with a boat making its way across. This opening scene reminded me of Ozark, and got me thinking about how using something like an open water space to tell a story is still rather new and fresh, it gives the cinematographers something interesting to play with and is capable of grabbing the audience’s attention right from the start if done correctly. And may I say, they did so here.

The swamp is beautiful to look at, between the luscious green coloring that we get and the darkness which is referred to by the Swamp Thing itself in time, which we get to see physically portrayed as rot. The joy of getting to see the swamp physically grow branches and twigs, manipulate the water, and even slowly die at some points made me smile. I can only imagine the costs to the company creating the show due to how much it must have been to give the viewers something so life like and realistic. Of course, we know that trees can’t be manipulated like in the show, but the movement of the branches, and how they envelope all of those whom seek to destroy it.

Over time, the show gives us visuals that will stick with you for a while after seeing them, some of these are as simple as a boat moving through the swamp, but others are much more complex. When we see that people are dying from the green flu which they are infected with, it begins to take over their corpse and seems to try and develop itself into something greater. In the hospital, while inspecting a body, Abby and Alec find themselves until attack from what is effectively the swamp utilizing a corpse as a mural. The way in which the tentacles of branches move and sway in such a lifelike manner created an image that made me feel like I was watching a body being set up as art like in Hannibal. The fluidity that the creature has alongside the sharpness in contrast between the previously human body with nature pulsing through it as a whole, created something that deserved to be looked into further.

The best visual in this show? Without a doubt, the Swamp Thing, I was originally concerned that we would not see much of the creature and he would be left to stay in the shadows due to the cost of using CGI on such a beast. But instead the show created a practical suit that was worn by Derek Mears which gave the audience a figure that was both imposing and warm. You could not help but stare every time he was on the screen despite being a somewhat grotesque creature, this was an interesting development and not what I thought we would see. The intricacy that went into this creation was best seen during an autopsy of the character, where we came to understand how he was created and the role that the swamp had in taking over the human body that came before, creating organs which had the effect of being green, yet normal, sturdy, but evolving, and something that you wanted to see explored.