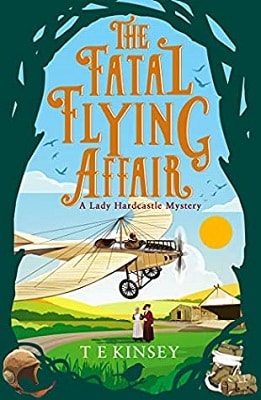 The year is 1911, and once again His Majesty’s Secret Service is in need of the unique talents of one of their most unconventional pairs of spies, Lady Hardcastle and her sidekick Flo Armstrong. To the uninitiated, Emily and Flo appear to be two of the most eccentric British citizens who have ever retired to the country. The retirement doesn’t last.

In The Fatal Flying Affair, Emily’s brother, Harry who contacts Emily and Flo. In his role as their superior in the secret service, Harry asks them to look into the possibility there is a spy at a local aircraft manufacturer—a place where the secret service is also hard at work trying to develop a new type of parachute that can be worn on the pilot’s back. Airplanes are rather new developments, and so far the only parachute they have is one that is used to try and slow the descent of the entire plane. The secret service is interested in developing one that can be used by the pilot in situations where the plane needs to be abandoned mid-air.

Unfortunately, the first test of the parachute using a human instead of a test dummy resulted in a young man’s death.  Even so, someone tried to steal the parachute’s plan and pass them off to a foreign government. That effort was thwarted; but since the secret service doesn’t know the spy’s identity, nor do they know the specific government involved, they reach the conclusion that some fancy undercover work needs to be done. To that end, Emily and Flo begin the work of spying, performed as only Emily and Flo can, with a healthy dose of humor and unexpected martial arts skills when required.

Because Emily is a wealthy aristocrat, their cover story of being interested in purchasing a plan for private use is never questioned. She is also a delightful addition to any dinner party or meeting, so her presence is always welcome. Everyone further assumes Flo is Emily’s maid, a role both women encourage as Flo finds it easier to move around unnoticed when necessary.

As a mystery, The Fatal Flying Affair stands alone, with no need for the reader to have read the previous novels. However, there are some character developments that occur in earlier novels, so the reader who enjoys series may prefer to begin with the first book.

My thanks to NetGalley and Amazon Publishing UK for providing me with an advanced copy for review. This book is scheduled to be available for purchase in the United States on December 3, 2020.

The reality of separation becomes more desperate and more deadly

END_OF_DOCUMENT_TOKEN_TO_BE_REPLACED

She lured him away from his devoted and well-known wife, Agatha Christie