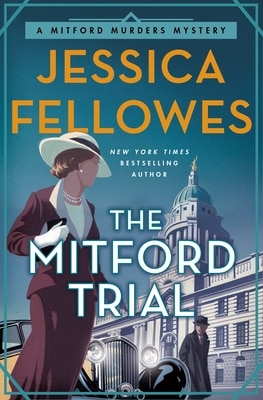 For her fourth book on the legendary British Mitford Sisters, author Jessica Fellowes follows them on a cruise—a cruise that turns out to be worse than ever imagined, and one that puts the family right smack in the middle of the action and intrigue.

Fellowes is the niece of Julian Fellowes, the writer of Downton Abby, and so she seems to have followed his lead in these books about the Mitfords—who are wealthy aristocrats—as well as their now former maid Louisa. The Mitford Trial really shows the differences in the class structure in England, as Louise has already left the families employ when she married policeman Guy Sullivan. But despite that fact the family feels they need a maid to accompany them on their three-week cruise, and so Louisa reluctantly accepts.

Lots of fascinating people are on this cruise, including a German businessman and his assistant, a bankrupt architect and his always drunken wife, amorous crew members, and many fellow wealthy Brits and nobles. Halfway through the book Louisa’s husband, Guy Sullivan, joins the group, seemingly out of the blue. And it is shortly after Guy arrives on the boat in Livorno, Italy that a heinous crime occurs.

One of the Mitford sisters is called to the scene and she alerts Louisa and Guy to the crime. Because of the boat’s location in international waters (and since it is a British cruise liner) Guy is quickly put in charge of the investigation, as he is the only British police officer onboard.

Before we know it, two people are claiming to be the assailant and nobody knows for sure what really happened, how it happened and why it occurred. Eventually Louisa discovers the weapon and soon a search of the entire ship occurs. Incidents occur that force Louisa into a prime investigative role and by the time the boat arrives in Rome the assault has turned into a murder and two people are under arrest.

Interspersed within the book are scenes from the murder trial two years in the future, and by the end of the book there are plot twists to keep your head spinning!

This being the fourth book of the series, all the names and titles of the Mitford Sisters and family get confusing to a first-time reader. Sometimes we have first names being used, other times married names, and then there are titles also used.

If you can work your way around all of this, you will find that The Mitford Trial is a real page turner that exposes the foibles of the upper class, as well being one heck of a good mystery!