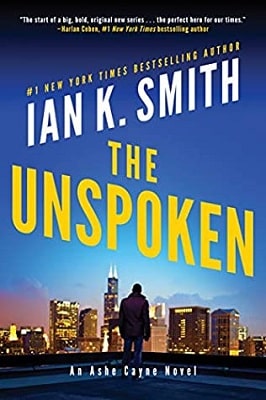 Ian K. Smith does a fabulous job with this series debut, introducing the world to Ashe Cayne in The Unspoken. Moving through the tough streets of Chicago, Cayne uses some of the skills he brought from CPD into his private investigation firm. Tasked with finding a missing woman, he will have to see through the haze of the rich as well as juggle the socio-economic disparity the city has to offer to piece the case together. Well worth a read by anyone who enjoys the genre!

Ashe Cayne may not have left work with the Chicago Police Department on the right foot, but he’s been able to effectively use his skills to develop a great new gig as a private investigator. So much so that he’s been summoned to see Violet Garrigan, a woman of some financial means. Her daughter, Tinsley, has gone missing. Not only is it important to locate the errant twenty-something, but discretion is paramount. Cayne agrees to the terms and receives a few tidbits on which to begin his work.

After talking to one of Tinsley’s friends, Cayne learns that there was a boyfriend on the side, one the Garrigans would surely not approve being made public. Not only is Tariq ‘Chopper’ McNair a relative of one of Chicago’s most ruthless gang lords, but he’s black. Cayne knows he has his work cut out for him, but forges ahead, hoping that this will prove useful.

After getting the lay of the land, Cayne discovers that Chopper may have blood relations with those on the rough side of town, but he’s well-educated and does not partake in the family business. He loves Tinsley and simply wants her found as soon as possible. Cayne promises to do his best, though with few leads, it may be hard to make any progress.

All that changes when some forensics comes back in the form of phone records. Cayne discovers that Tinsley has an active phone life and a few of her callers prove to be highly intriguing, including the psychiatrist. As hard as he tries, Cayne can get nothing from the doctor, which leaves him wondering if she was harbouring a secret. He’s also baffled as to why Mr. Garrigan seems so calm about the disappearance, as though he is too pre-occupied to care about where his daughter might be. A clue points to a business deal, one that could shed some bad light on the Garrigan name, though things are still too hazy to tell.

In the midst of the investigation, Cayne locates a man for whom he has been searching. This is someone who appears on the up and up, but holds a dark secret behind closed doors. It’s time for Ashe Cayne to help bring about some justice for those without a voice, using some unorthodox means, fueled by a vindictive streak.

When a body is discovered, Cayne rushes to the scene, only to learn that it’s not Tinsley, but Chopper. Obviously someone wanted him silenced, though the markings on his body point to a rival gang. Had Tinsley found herself in the middle of a gang war? It’s now a missing person and murder investigation, as things continue to heat up.

Just as the case is gaining momentum, Violet Garrigan fires Cayne, citing that things have become highly personal and they will handle them on their own. Cayne can only surmise that he’s turn over too many stones and let out a few secrets no one wanted revealed. However, he’s invested and continues to poke around, sure that he will piece it all together. A few other scandalous tidbits come to light, which could only add to the drama. It might also be the perfect motive to kidnapping and murder.

Having never read anything by Ian K. Smith before, I was eager to see if it would be to my liking. I soon discovered that Smith has a wonderful style and can construct a story effectively, while pulling the reader in with ease. Breadcrumbs are left for both the reader and Ashe Cayne to follow, though where they lead is sometimes the greatest twist of all.

Ashe Cayne is an enjoyable protagonist. After being let go by CPD for some questionable behavior, he’s out on his own and making a name in the PI business. He’s still trying to come to terms with the loss of his fiancée, something that surfaces throughout the story, but his work is a wonderful way to distract him. With a penchant for doing his best thinking on the golf course, Cayne is able to connect with some of the financially sound people of Chicago, making it a little easier to get access to the information he needs. There’s still a great deal about him the reader does not know, though one can hope that subsequent novels in the series provide that.

Smith utilizes a strong cohort of supporting characters, many of whom offer the needed flavoring to the narrative that allow it to excel. Touching on the world of the rich, the reader can feel that sense of entitlement that permeates throughout the story. This contrasts nicely with those who work the streets of Chicago to earn a (less than legal) living. There are also a number of background characters who help Cayne with his work, those who might be best called his ‘crew’ and whose presence begs for additional interactions. They are able to offer the leads on the case, as well as coax out some personal growth in Ashe Cayne. I am eager to see how they might be used in another scenario throughout the series.

Smith presents his story in a way that is both exciting and relatable. While I have never visited the city, I felt as though I were strolling the streets of Chicago with Ashe Cayne. The narrative progresses well throughout, though there are no moments of ‘rushed solution’ as though Smith sought to quickly glue the pieces together for the reader. His slow reveal keeps the reader guessing and provides the needed momentum to ensure the piece keeps the reader hooked. Mixing up his chapters, Smith pulls the reader into the middle of something great and does not let them go, almost begging them to read ‘just a little more’. It worked, as I was up late just trying to piece it all together. I am eager to see where Ashe Cayne and this series intend on going in the coming years. With a second book already being publicized, I will be sure to get my hands on a copy.

Kudos, Mr. Smith, for a winner. I am intrigued to see what else you’ve written in the fiction world. Perhaps I’ll have to have a look while I wait for Ashe Cayne’s return.

Commissario Brunetti pursues leads in the criminal underbelly of Venice

END_OF_DOCUMENT_TOKEN_TO_BE_REPLACED

Review: Deep Into The Dark