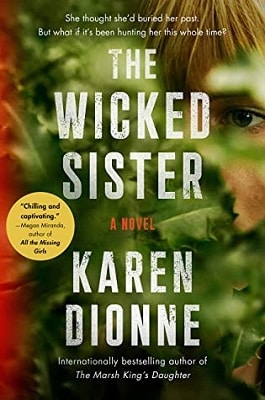 After thoroughly enjoying one of her previous novels, I was pleased to get my hands on the latest work by Karen Dionne, which proves to be just as eerie. Telling a family’s story in two time periods, Dionne keeps the reader enthralled as pieces of the larger narrative slowly fall into place. Those who have enjoyed Dionne’s past work will not want to miss this one!

Fifteen years ago, Rachel Cunningham was locked away in a psychiatric facility, having  murdered her parents at the age of eleven. The flashbacks are as vivid as ever and she refuses to talk about them with anyone. When a reporter arrives to chat with her about telling the story, he explains that the evidence shows Rachel could not have committed the murders and that her self-imposed isolation can end if she wishes to sign herself out.

In a second narrative, two decades earlier, Jenny and Peter struggle with the death of a neighbourhood child who drowned in their pool. While their daughter, Diana, denies having anything to do with it, the evidence Jenny discovers says otherwise. Worried about the ongoing shaming that might occur, they reluctantly pack everything up and move into Peter’s family cabin, deep in the woods. There, Diana can thrive on her own, or so her parents hope. When Jenny reveals that she’s pregnant, she can only hope this change in the family will be best for everyone.

The new baby proves to be the polar opposite of Diana, something Jenny and Peter secretly enjoy. As Rachel grows, her sister is constantly pushing the limits and trying to harm her. Diana’s diagnosis as psychopathic makes it impossible to leave the girls alone, even for the shortest time. When Diana acts out once again, it is Rachel who reveals the truth to her parents, causing them to have to make a significant decision that is sure to make ripples throughout the entire Cunningham family.

As present-day Rachel comes to terms with some of these suppressed memories, she encounters her sister once again. Rachel reveals what she knows about the day their parents died, leaving Diana to act in the only way she knows how. As the truth comes to the surface, wickedness receives its true name and a family is torn apart anew.

The story reads like a well-crafted psychological thriller with hints of evil throughout, as the title suggests. Karen Dionne creates a wonderful tale that works along parallel timelines, revealing just enough to keep the reader guessing, though keeping the pieces from falling into place until all is said and done.

Rachel Cunningham proved to be a worthy protagonist. Having locked herself away at a young age, she has no one but herself and the animal kingdom to keep her company, part of her upbringing in the woods. She seems enveloped in a mental fog, something that slowly reveals itself, only to create new chaos for her. Rachel remembers scraps her her life with Diana, though it is only when they reconnect that the truth begins to flow freely, which may not be the best thing for her.

Dionne’s use of strong secondary characters keeps the story moving, particularly as the other Cunninghams fill many of those roles. The reader can learn a little more about the strains that occur within the family, as Jenny serves to recount the flashback narrative, though it is Diana and her actions as far back as being nine that almost steal the show. Completely devoid of emotion, this child is a parent’s worst nightmare, as can be seen throughout the book.

While it took me a while to connect the two narratives, the plot thickens from the outset and the reader can surely forecast what is to come. In a story told through the eyes of Rachel and Jenny, there are many ‘aha’ moments in both the present-day plot and that from years ago, when the parental murders took place. Dionne uses alternating chapters to tell of both time periods, forcing the reader to split their attention, though as things gain momentum, everything makes sense in both timelines. Chilling reveals throughout and the final face-off between Rachel and Diana offers the best of all the plot lines, with a twist at the end to tie it all together!

Kudos, Madam Dionne, for another winner. I cannot wait to see what else you might have in store for your fans.