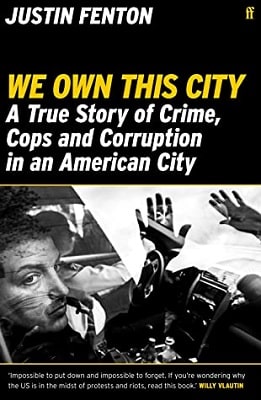 We Own This City

Justin Fenton’s We Own This City is an enthralling chronicle of shameful and shocking police corruption in modern-day Baltimore, Maryland. A band of police officers run criminally rampant, with criminal investigations taking years before their eventual downfall.

We Own This City starts out slowly, but after gaining its hold, the book unfolds like a relentless, well-crafted fictional police procedural. Only this time, the police are the villains and this is a true story.

The main focus is on plainclothed street detectives and the Gun Trace Task Force (GTTF) unit led by a detective sergeant named Wayne Jenkins. Jenkins and those he supervises are tasked with tackling gun crime and investigating the most dangerous of criminals in the city of Baltimore. In police jargon, Jenkins is best described as being a “cop’s cop” and roams wild in the city producing favorable results envied by many. Almost by design, the criminal behavior of Jenkins, and those like him, mainly goes unnoticed because to most, success is indicated by putting drug, gun, and money statistics up on the board. Results by these supposed cream-of-the-crop police officers are looked at in awe and celebration by not only peers outside of this working group, but by their supervisors and department administrators as well. Unfortunately, what all those outside of Jenkins’ working crew do not know is during all of this time, Jenkins and the other officers have been committing just as many crimes as those they are supposed to be jailing.

Fenton especially excels at the telling of a complex, exciting story based in voluminous research without the depiction of overwhelming statistics and data dragging into the storytelling. Fenton is also successful at portraying those targeted by Jenkins and his fellow police officers in a sympathetic manner even though they themselves are clearly not angels. While these patrons of the streets are committing criminal acts themselves, Fenton is still able to place a human face upon them. He also points out, as victims of robberies, home invasions or planted or fabricated evidence, these targets realize it is futile to report such incidents because they know whose word will be believed.

On top of the excellent research, Fenton also aptly explains just how Jenkins and other police officers were able to commit these acts for so long. In his explanation, under the political demands and pressure for lower violent crime in Baltimore, too many (especially supervisors and administrators) turned a blind eye to misbehavior if such aggressive law enforcement tactics brought the promise of lower violent crime. In other words, too few were willing to dig too deep or even pay much attention into officer conduct as long as crime rates started to decline.

I will not be a surprised if We Own This City is quickly snatched up for movie adaptation.

NetGalley provided an ARC for the promise of a fair review.

A True Crime podcaster investigates the murders beneath Devil’s Bridge