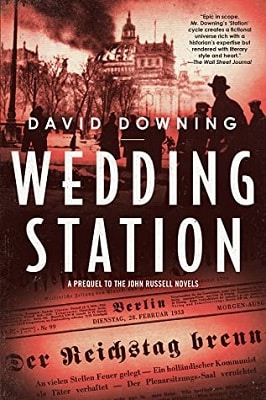 David Downing has created a marvelous oeuvre of six espionage thrillers featuring Anglo-American journalist John Russell in the backdrop of Nazi Germany. They are collectively known as The Station Series with each novel being named after a train station, mostly in Berlin. The series concluded in 2013, leaving an extensive fan base hungering for more. Thankfully, he has written an intriguing standalone preamble to the series artfully exploring the origins and motivation of our intrepid hero John Russell.

John is working on the crime desk of the Morgenspiegel, hoping to avoid any confrontation on the political front. He has recently separated from his German wife, Ilse and is worried that a divorce would result in his compulsory expulsion from Germany, and more important an inability to have a relationship with his beloved five-year old son, Paul.

This tale is not so much about the Nazis, who are continually mentioned tangentially, but rather the focus is on the German populace living and surviving in Berlin, as seen through the eyes of John Russell. In 1933, Adolf Hitler has won only 43% of the vote and required a coalition with the Nationalist allies to gain control. There are many who fear his reign, not only his opposition of the socialists and communists, but many everyday Germans. Most fear repercussions with any dissent. Knowing the likelihood of being arrested, interrogated, tortured with the real possibility of disappearance (euphemism for death).

Russell’s crime reporting leads to the inevitable need to investigate and shed light and make sense of the crimes. He is well aware of the need to avoid confrontation with the Nazi minions in any of these crimes. Several of these investigations are explored in detail and have major implications to John’s survival.

A “rent boy” (male prostitute ) in his late teens is brutally killed and mutilated at the Moustache Lounge, one of many homosexual clubs in Berlin. They remain open most likely due to the known proclivities of Nazi leader, Ernst Rohm. Russell’s investigation results in contact and interview with the victim’s friends. Eventually he receives a detailed personal journal of the victim via post. A reading of the journal implicates multiple prominent SA leaders, including friends of Rohm, and not only in their “rent boy” patronage, but probably their killings. What could he possibly do with this information?

One morning Russell rushes to the scene of the hit and run killing of Konrad Mommsen, a respected 38-year-old genealogist. With just a little digging, John soon realizes this “murder” has far reaching implications. Checking one’s own racial purity has become a growth industry. Needless to say, millions of Germans (including Nazi leaders) have some Jewish blood.

The next most important event that calls John Russell is the disappearance of the famous clairvoyant, Harri Haum. His client list includes multiple celebrities, business and military leaders, film stars, and even Nazi politicians. But, rarely mentioned is his Jewish ancestry.

David Downing proves to be a masterful storyteller, as he once again weaves together a complex set of events in a compelling fast-paced narrative. A mood of foreboding is rank throughout the travails of Russell, with a sense of living on borrowed time. John Russell’s character and motivation is progressively layered in this propulsive read. Along the way, we explore the streets of Berlin, and eat at the famous cafes, bakeries, coffee shops, bars, and restaurants of Berlin. We revel in the local culinary delights of the day. However, Russell offers his mental picture of Nazi Berlin as a painting by Hieronymus Bosch. “A grid of peaceful tree-lined streets, and in the lacunae between them, people screaming their heads off, shackled to wheels of fire.”

Thanks to NetGalley and Soho Crime Press for providing an Uncorrected Proof in exchange for an honest review. I’m so jealous that many readers can look forward to devouring the six other books in this delightful series.