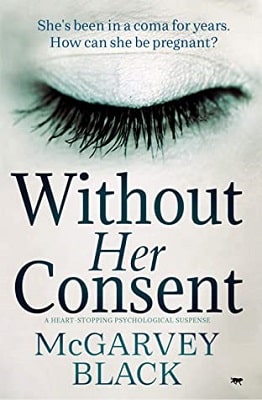 McGarvey Black writes about a horrible crime perpetrated against a defenseless woman in a coma. Who could have done it? And how long will it take to discover the perpetrator? A quick read, perfect for those who love the genre, as well as the reader who’s keen on piecing it all together.

Oceanside Manor is home to patients who have suffered traumatic brain injuries, including Eliza Stern. Eliza’s been a patient for many years, having been the sole survivor of a horrific car accident that claimed the life of her family. When a nurse discovers that she’s in labor, it’s all hands on deck.

Dr. Angela Crawford may not be actively practicing as an obstetrician, but has done well as the acting head of Oceanside Manor. The news of Eliza’s pregnancy and birth of a baby boy creates more headaches than she could imagine. Angela tries to handle the situation on her own, though the Chair of the Board is sure to remind her how incompetent she can be.

When Angela reaches out to the police, it becomes a full investigation into the rape of Eliza Stern. It will take a massive effort to create a list of all possible men who have found themselves within the facility in the last ten months, but Angela will cut no corners to locate the rapist. She works in concert with the police, keeping the Board at bay throughout the process.

As the investigation progresses, the police work the crime, though not without news leaking. Headlines begin to appear around the world, making Oceanside Manor international news. A mysterious overdose by one of the staff leaves everyone wondering if the killer is back, trying to cover their tracks. Angela makes a decision that will benefit herself, though she justifies it as being a help to the investigation.

Eliza Stern may never wake up from her comatose state, but she deserves a voice. Angela promises to offer her that and bring the rapist to justice. It would take an especially heinous person to subject an unconscious woman to this fate, something that sits on Angela’s mind as the investigation reaches its climax.

This was my first novel by McGarvey Black, though I hope it is not the last. The writing was easy to digest and the story kept me interested throughout. There are medical, ethical, and criminal questions with which the reader can wrestle, alongside a plot that is full of decent twists.

Angela Crawford proves to be an interesting protagonist. This criminal act has fallen into her lap and she is forced to juggle everything on the fly. Her own backstory is a mix of happy times and some personal struggles, though she seeks to find the best it all of it. While she cannot be said to have complete control of the situation, Angela does her best to steer things in the right direction.

Black provides the reader with a slew of great secondary characters, offering different perspectives of the crime and investigation. From the medical professionals to the police and even the reporters covering the story, Black injects many personalities to keep the reader intrigued from every angle. With crisp dialogue and character development throughout, the reader can connect with many of those who fill the pages of this book.

The central plot of the book is one well worth the reader’s attention. An act of rape turns into an issue that will take the reader throughout many perspectives of the event. Told through the eyes of many—the police, the hospital administrators, journalists, and the Board of Directors—the story gains depth with each passing chapter. Black uses short chapters to hook the reader and keep them forging ahead, which is a great way to keep the momentum of this piece. The reader is sure to be entertained throughout, while left to consider where they stand about the various revelations found within this story. The final fifty pages alone make the book, as things come to a climactic reveal, something many will not have seen coming!

Kudos, Madam Black, for a great piece of writing. I will be looking into some of your other work, with hopes that it is just as intriguing.

His need for control escalates

END_OF_DOCUMENT_TOKEN_TO_BE_REPLACED

What should be a simple case of infidelity becomes more complicated

END_OF_DOCUMENT_TOKEN_TO_BE_REPLACED

With snow falling heavily, they have no choice but to break in