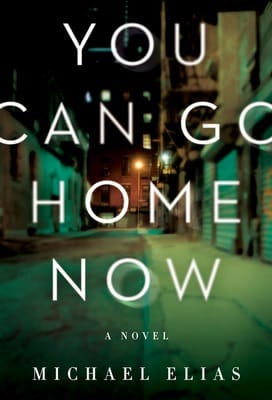 You Can Go Home Now

There is something chilling about Michael Elias’ latest thriller, You Can Go Home Now, that is sure to pique the interest of the reader. A single cop working a handful of cold cases with one of her own that has been simmering for decades. Nina Karim knows how to follow the rules and when to break them. She’ll need a little of both if she has any hope of setting things straight. A strong story is sure to keep the attentive reader begging for more!

Nina Karim knows what she wants and how to get it. Having risen through the ranks of the Long Island City PD, she knows that her single status and being a woman makes it hard for her colleagues to take her seriously, though she has long since stopped caring. She’s handling some of the ‘lighter fare’ in the department and is trying to track down a missing couple whose domestic bliss is long past its due date.

After a body is discovered, it turns out to be the missing husband, an abusive man with a long reputation for using his fists before any common sense. Being a former cop, the Blue Wall seems to have protected him for a long while, as his wife has turned out to be a punching bag. Detective Karim locates the wife who has been staying at a women’s shelter. She promises that she is not involved, but cannot say that she is sorry to see him dead.

Karim expands her search parameters and discovers a number of other cold cases with abuse as an underlying circumstance. It would seem that this particular women’s shelter is housing a number of the victims’ significant others. Could there be a massive coincidence or is this a lead that could yield a killer? Karim must find out and so she poses as an abused woman, putting out feelings to see if she can use an abused victim story to churn out a ‘hit’.

While all this is taking place, Karim has been wrestling with the murder of her father years ago. Killed by a sniper in the kitchen, likely for his willingness to perform abortions on women who sought them, Karim is sure that the killer is part of a pro-life movement that made New York anything but safe back in the day. She has a few leads of her own and will stop at nothing to avenge the death of an innocent man. But, will the end result prove more troubling than the sense of relief that comes from locating a killer?

Michael Elias writes is new to my reading experience, but he writes in such a way that one cannot help but feel a sense of connection quickly. The story is strong and the narrative flows well, keeping the reader on their toes and wanting to know more as the pages turn.

Nina Karim may not be a cop whose story is entirely unique, but she has a wonderful way of approaching life. She has her own missions, both personal and professional, as well as a strong sense of dedication to the task at hand. Her backstory is littered with peaks and valleys, though she is never one to dwell on them. While her father’s death haunts her, she has a plan to avenge him, even if it takes her to hell and back. With some grit and determination, Karim will face anyone that stands in her way and finds herself to be an advocate for those who need it most, namely herself.

Elias keeps the story strong with a full cast of supporting characters. He tells a few of the strong subplots with a vast array of people from all walks of life. Things are never dull and the reader can almost feel as though they are at the center of the action, with realistic dialogue and banter. I could almost picture myself watching some of the interactions as I read this book, they were depicted that well.

The story’s premise was strong, tacking abuse and retribution through the eyes of the victim. At times somewhat disturbing, but in a way that is sobering to the reader who has not experienced it, the story takes on a great deal and tries to put some sense into it. Elias has a way with words and lets his narrative flow well as things keep gaining momentum. With short chapters, the reader is pushed into forging ahead and trying to solve the case in a single sitting. Elias knows what he’s doing here and while abuse is no laughing matter, there is a sense of happiness as some semblance of retribution takes place within the pages of this well-crafted novel.

Kudos, Mr. Elias, for an insightful piece. I am eager to see what else you have in store for you fans, and will have to look into some of your previous publications.

END_OF_DOCUMENT_TOKEN_TO_BE_REPLACED

A problem solver runs afoul of a gangland leader