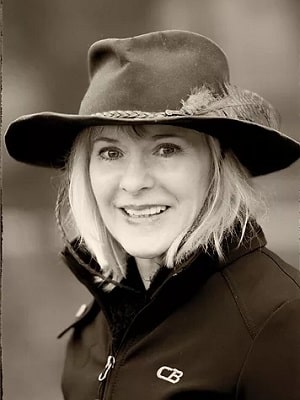 Sasscer Hill’s books have won the $10,000 Dr. Tony Ryan Award for Best Book in Racing Literature (FLAMINGO ROAD.) They have also garnered a Carrie McCray Award and been nominated for Agatha, Macavity, and Claymore awards. Her second book in her two-book “Fia McKee” series, THE DARK SIDE OF TOWN, received a Booklist Starred Review and was an Editor’s Pick in the Toronto Star.

Her newest title, SHOOTING STAR, is her fifth novel in the “Nikki Latrelle” mystery series.

Q. Where did the idea for the story come from?

Sasscer: It came about after watching the ill-fated HBO series “Luck.” It was about horse racing at Santa Anita Racetrack in California. The horses were hurt so the whole show was cancelled. My main character, Nikki Latrelle goes undercover as a horse exercise rider for the TRPB.

Sasscer: Yes. Their mission is to protect the integrity of horse racing from the corruptness and graft. The FBI is also connected with this agency. It was started back in J. Edgar Hoover’s day. Now it is about the betting to see if there is illegal stuff going on. There is also testing for drugs. It is very intricate and specialized to look for drugs of the two top winners and a random horse.

Q. Did you ever write about drugs given to horses?

Sasscer: The oddest thing I’ve ever researched was for the first Fia McKee book, Flamingo Road. There is a drug called Demorphin that was first used at Remington Park racetrack in Oklahoma. It is up to 100 times stronger than morphine and a few of the shoddiest and most horrible trainers were using it. Their sore or injured horses would run through the pain and win line. The drug was made from enzymes and peptides collected off the skin of a certain South American tree frog. Race trackers referred to the drug as “frog juice.” The horses would run their hearts out that would eventually cause the horses to break down. Eventually they were able to test for it and make sure the horses were not given these horrible drugs. This agency is forcing all states to consolidate testing and use the same rules throughout the US.

Q. What’s the role of horse racing in your books?

Sasscer: My first books, the early Nikki books, had individual horses prevalent. In this book I wanted to emphasize horse racing and the movie industry, how to film horse racing. This is a different type of crime and more of a thriller than a mystery. I vary the crimes. In my first Nikki book, titled, Full Mortality, it was about horse racing insurance scams. The only way owners get money is for the horse to die, not just be injured. Because of that there were some people killing horses. Nikki was determined to save the horse.

Q. How would you describe Nikki?

Sasscer: Brave when defending an animal or friend. She is not very good at speaking up for herself. A rescuer and someone who looks after those in need.

Q. How prevalent are horses in this one?

Sasscer: Travels of Quinn, about a girl, Quinn O’Neill, raised in South Carolina by criminal scam artists. They teach their children and are very isolated. But this girl, nineteen years old, wants to leave them. All my books are kind of different. Some are more character driven and some are more plot driven. This one is not centered around horses. But Quinn ends up working on a horse farm and falls in love with horses. The horses are her savior.

Sasscer: Quinn’s mother left her father, also escaping the criminal life. The book title, The Search for Jennifer O’Neill, has Quinn seeking to find her mother. It should be out in November 2022.

Shooting Star by Sasscer Hill is another one of her “edgy cozies.” As with all her books her plot combines greed, evil, and courage into a mystery thriller. In this book readers are back in the saddle with the main character, Nikki Latrelle.

The plot has horse racing but from a Hollywood film angle, showing how Hollywood treats the animals used in a film. Nikki’s ex-lover Will hires her to protect the horses used to film a movie at Santa Anita Racetrack, trying to keep thoroughbreds safe from a director who doesn’t know a horse from a hamster is tricky. After a sniper’s bullet kills a cameraman with her standing nearby, she goes into an investigative mode. Her sleuthing unearths a trail of corruption and when she must lie to Will to protect his life, she’s on her own. Discovering money laundering and some “enforcers” she knows that not only other film crew members, but her life as well, is in danger.

After another incident where the main actress is injured, Nikki replaces her because of her riding experience as a jockey. The author Sasscer Hill is a former Maryland racehorse breeder, trainer, and rider, so she can write realistic stories and use her knowledge as a backdrop for her mysteries.

This is a murder mystery that reads like a thriller. It has complex characters, and a fast-paced plot. A bonus is how readers can get an insider’s look into the world of horse-racing, what it is like to be a racing jockey, and the treatment of animals by Hollywood. 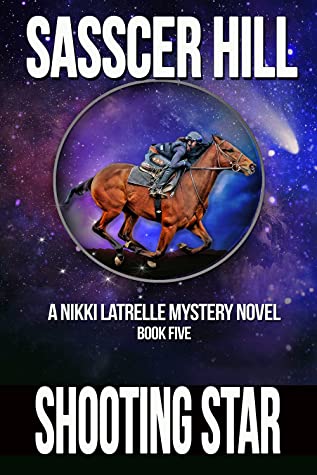 When Nikki’s ex-lover Will hires her to protect the horses used to film a movie at Santa Anita Racetrack, she learns evil is alive and well in Hollywood.

Keeping Thoroughbreds safe from a director who doesn’t know a horse from a hamster is tricky. More difficult are the unresolved feelings between Nikki and Will, especially when sexy, young movie star, Jamie Jackson, sets his sights on Nikki.

But when a sniper’s bullet shatters the brain of a cameraman close enough that she can smell his blood, Nikki’s need to protect overrides everything. Her sleuthing unearths a trail of corruption and when she must lie to Will to protect his life, she’s on her own. Can she identify the evil behind the scenes before she and Will become the next victims?