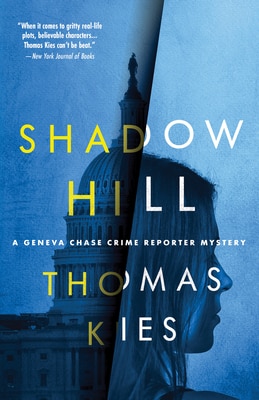 Shadow Hill is the fourth novel in the Geneva Chase crime mysteries series by author Thomas Kies. Set amidst the backdrop of the global climate crisis, Shadow Hill is a suspense-fueled and relevant crime novel that delves into the seedy underbelly of politicians and climate activists, seeking to gain from a grisly murder.

Oil executive Morris Cutter is slotted to give a climate change conference on Capitol Hill, but days before his scheduled appearance, Morris and his wife are found shot to death in their homes. When the local police deem the crime a murder-suicide, Geneva Chase is hired by the couples’ son, Eric, to disprove the police’s claims and find proof that the Cutters’ were murdered. As Geneva investigates, she soon discovers that Morris Cutter had a lot of enemies- from disowned relatives to politicians and, most especially, angry climate activists. But the more Geneva discovers, the more her life is at risk, and the more she questions who the bad guys really are—and who she can trust.

Kies definitely has a spunky protagonist in Geneva. After the death of her husband and a long battle with alcoholism, Geneva is on the road to recovery and trying to do the best she can raising her teenaged stepdaughter. Full of dysfunction, Geneva is painfully honest and relatable, and I bonded with Geneva right away. The story is told completely from Geneva’s point of view, and it isn’t long before we are immediately immersed in her world.

Although a new reader to the Geneva Chase series, I immediately caught on to the plot and the characters. Kies gives just enough background information to provide a smooth flow to the story and allows for swift relationships between reader and characters to form.

Shadow Hill is relevant and poignant, tackling the climate crisis from both sides of the coin. Kies manages to avoid pushing an agenda or taking sides while keeping the reader informed and entertained. The twists and turns in this novel made every character a potential suspect, and it kept me guessing until the very end.

Kies wraps up Shadow Hill in an action-packed, completely unexpected way. Although the conclusion itself was completely satisfying, and allowed for full closure, there is just enough left in Geneva and her friends to titillate the reader into wanting more, and I have no doubt Kies will deliver that in further Geneva Chase novels. I look forward to seeing this character again!