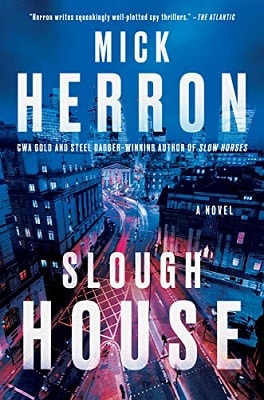 “Slough House didn’t recharge batteries, it sapped power. It’s as if there were negative ley lines, special coordinates where forceless fields met, sucking all spirit from whoever stood there, and Slough House was slap bang on that junction.”

Slough House, the home of the ‘slow horses’, the rejects and drop-outs from the British Secret Service at Regent Park, forever condemned to endless paperwork until they retire or resign to find a more fulfilling career. Over them all rules Jackson Lamb, shambolic, unwashed, uncouth, rude and cynical but underneath the façade always brilliant and always looking out for his Joes. They might be discarded, dysfunctional Joes but they’re his Joes and, even though he might abuse and belittle them on a regular basis, he’d do his utmost to protect them.

Roddy (‘The Rodster’) Ho, computer wizard, social misfit and ultracool chick magnet (but only in his own imagination) has discovered an anomaly he calls the Weird Wiping; every one of the Slough House employees have been wiped from the Secret Service database. They’re still being paid but their personnel files have disappeared. Is this some new game that Diana Taverner, newly appointed First Desk and Head of the Service is playing and if so, what does it mean for the slow horses?

Diana Taverner may have made a mistake in trusting a politician (what was she thinking?), to help fund a project on foreign soils. Now she finds herself beholden to the owner of a media news channel with a manipulative politician pulling her strings. Meanwhile slow horses are dying in fatal accidents and Lamb’s team are starting to feel that they’re being watched.

The latest activities of Slough House play out against a background of contemporary British politics with Brexit chaos, novichok poisoning of ex spies by Russian agents on British soil, and street demonstrations by the disaffected and disgruntled populace unhappy with the current government. As ever, the writing is razor sharp, the dialogue clever and witty, the carefully laid out plot unpredictable and the humour sardonic and biting, sneaking up to cause sudden outbursts of laughter. The uneasy relationships between the misfits of Slough House are evident as they attempt to work together but somehow, we can also glance their fears and vulnerabilities and feel a fondness and affinity with them as events move beyond their control. Lamb’s clandestine meetings with Diana are always entertaining with their repartee a delight. Despite her revulsion at his decrepitude, she is fully aware of the devious and brilliant mind lurking beneath the façade.

This much anticipated addition to this excellent series was indeed worth the wait. But oh, that cliffhanger of an ending, Mr Herron! Please don’t keep us holding our breath too long for the next episode!

With thanks to Soho Press and NetGalley for a copy to read. Publication February 9. 2021.

END_OF_DOCUMENT_TOKEN_TO_BE_REPLACED

An aircraft makes an emergency landing at an Iranian military base