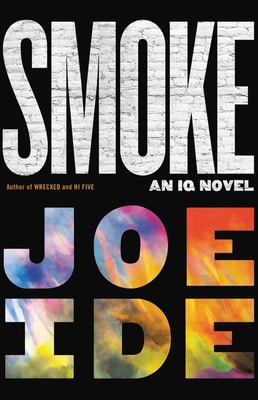 This is the fifth book in this unique series, but my first foray into the world of Isaiah Quintabe (Queen-tah-bay) written by Joe Ide (EEE-Day). I was able to successfully jump onto to this fast-moving train and thoroughly enjoyed this character-driven adventure filled with wit, heart, and emotion.

Although this complex narrative is told in multiple points of view , the main protagonists remain Isaiah Quintabe (“IQ”) and his best friend and sidekick, Juanell Dodson. Both are faced with daunting crises in their lives, unrelated to their friendship and partnership.

IQ as a seventeen-year-old was faced with the gut wrenching death of his beloved older brother, Marcus, killed by a hit-and-run driver. Initially his bitterness resulted in a brief interlude with crime, but eventually in a search for clues to this senseless killing he achieved success as a street detective. His native intellect and burgeoning skills of deductive reasoning along with his almost photographic memory allowed him to link seemingly unrelated facts together to understand motivation and behavior. However, at this juncture in his life, he is suffering a form of PTSD, and is overwhelmed by the almost daily dealing with the infectious offal of humanity. Burnt out by the incessant dealings with gangs, killers, drugs, pimps, and never-ending corrosive conflicts of street life. He is on the road and on the run and destined to seek solace in the small town of Coronado Springs, which eventually proves to be a nexus point for anything but comfort.

Our second intrepid hero is Dodson who independently has reached a crossroad in his relationship with his wife, Cherise. He has been given an ultimatum to join the “real world”, and drop his street live existence, and provide stability for his wife and child. This diversion in the tale, could easily occupy a novel by itself. With humor and emotion, Dodson’s foray into the advertising world as an intern allows him to display his innate creativity; all based upon his nature as a hustler.

Ide proves to be an expert storyteller as he weaves effortlessly the multiple multi layered colorful characters into a complex and unexpected denouement. At one point, approaching a collision course nexus, Ide has an explosive array of his characters …. IQ, his girlfriend, Grace, a serial killer, Billy, and Ava (locked in pact to seek out the killer of her sister), Skip Hanson (hitman, recently released from prison and out for revenge), and the local sheriff. Ide’s usage of dialogue is masterful as he utilizes satire and sarcasm with a touch of understatement. He deftly alternates and mixes an elegant and almost poetic prose with bursts of street jargon. The death defying humous interaction between Dodson and his mother-in-law Gloria alone is worth the price of admission. It is truly amazing how many well-developed intriguing characters can populate one novel. How wonderful to have four earlier tales to immediately download and devour.

Thanks to NetGalley and Mulholland Books for providing an Uncorrected Proof of this marvelous adventure in exchange for an honest review.