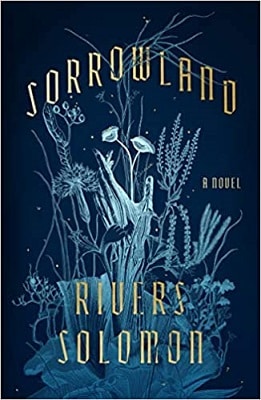 Rivers Solomon is carving out a unique and exciting corner of the world for their writing and stories. All three of their long works are filled with people who do not follow gender norms, who are marginalized, and for those who do not always have main characters in fiction that represent them. The easy things to talk about are the way Solomon represents the LGBT+ community, the nonbinary community, and the black community, but it is important to not overlook how great Sorrowland is as a great piece of fiction.

The book opens with Vern, an albino pregnant with twins, escaping a cult (The Cainites on the Blessed Acres of Cain), to raise them the way she wants to raise them. Vern runs with her twins, Howling and Feral, even though the cult is following her, tracking her because they need her back. The Cainites are physically changing through experiments sponsored by the government, and Vern is the most successful of the group. They need her to survive. Vern does not want to return so she uses her cunning and some help to try to stay hidden.

As the novel unfolds, the tension and anxiety continues to increase. We know that Vern is not going to be able to stay hidden forever, that they are going to find her, and that even though the sympathetic response of fleeing eventually has to turn to fighting, we do not know what the outcome is going to be. By the end of the book, Vern has changed, become stronger, but with this strength comes pain and hurt. The physical metamorphosis of Vern changes with the mental metamorphosis, that she needs to have a final standoff with the cult instead of running. Of course the “final standoff” is not what she expects at all.

Solomon writes Sorrowland in a way that all of it feels very real. One aspect is the way they use the impact of the cult to influence some of Vern’s decisions. Vern is attracted to women and this is against the teachings of the Cainites. Even after she is away from the cult for years, she feels the oppression and guilt from her upbringing. The guilt that she expresses feels very real, and it all makes sense to the way that she was raised and the things that she was admonished for while still living on the Acres of Cain.

The entire novel, particularly Vern, the physical transformation that she endures and the visions that get stronger and stronger throughout Sorrowland, feels very real. It is one of those novels that you want to talk about because there are so many layers that can be explored. From the history of the way the government has experimented on people of color in this country, to the way that the visions and haunts are used to fill the gaps in the story, but in such a subtle way that it is acceptable, to the end, this needs to be read by everyone so that it can be discussed at length. All of River Solomon’s works beg to be discussed at length, and they should not be overlooked.