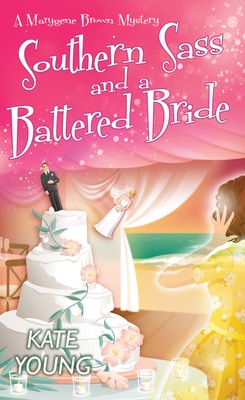 Southern Sass and a Battered Bride

Start by featuring the Deep South with things like sweet tea, peach-colored everything (including a diner, desserts, and décor) and add family loyalty that transcends even common sense. Put it all on an island off the coast of Georgia and you have the start of the newest novel by Kate Young.

Now that you have the setting, throw in a wedding catered by the groom’s former girlfriend—a bridezilla who is the epitome of “she’s not from around here”—and a best friend who has problems with letting her mouth run away with her, and you have the some of the central characters who inhabit the island and the book.

With this as a beginning, it’s no surprise when fireworks explode in all sorts of directions. For example, there’s the murder-mystery-themed wedding reception. Unusual, yes, but it could work. Everything seems to be going fine, the wedding goes off without a hitch, the wedding cake gets its finishing touches added and looks perfect. Then Marygene—caterer, ex-girlfriend, and main character—walks around inside the reception tent and almost trips over the bride’s body. After a quick breath, she relaxes. It’s unusual, but she can totally see this particular bride insisting she be the corpse in the evening entertainment. Fine. That is until it appears the bride is a corpse for real. Before that can be confirmed, though, the body disappears. And the real fun begins.

Questions pile up. Is she really dead? If so, how did the killer move her body? And if not, where is she? Why are there so many clues pointing to Marygene and her best friend Betsy? On top of it all, why can’t the island ghost, formerly Marygene’s mother, understand what’s happening? She’s supposed to be stuck on the island to help Marygene stay safe and do good works until she has atoned for things she did when she was alive. But now, all she knows is something’s not right. Things are going to get bad before they get better.

Without a doubt, that is the understatement of the year. Before Marygene can get unstuck from one situation, her ex, Alex, a deputy with the sheriff’s department, goes off-island and brings back a detective who seems to have it in for the island in general and Marygene specifically. Alex is also Betsy’s cousin, so he’s not only attacking Marygene and her father, the sheriff, he is being disloyal to his family when he accuses Betsy of being involved in the whole mess, behavior that is unheard of in this close-knit community. Battlelines are being drawn all over the island, and no one is making sense of any of it.

There are a few side issues, many of which are on-going developments from relationships that began in earlier books. These issues include the relationship between Marygene and Javier, a sheriff’s deputy; the heart attack that sidelines Marygene’s father, the sheriff; and the occasional, but not nearly often enough, aide Marygene and others get from the island ghost.

The mystery is well developed, although seasoned readers of mystery fiction may figure out the solution before they finish. Still, they’ll want to stick around to the end to find out how everything resolves. This is the third book in the series, and there is every indication the series will continue beyond this novel. The mystery begins and ends within this book, so there is no need from that standpoint to have read the previous books. There are relationships and other growth points for characters that have developed over the previous books and continue to develop here. While Young does a good job of informing the reader how characters relate to one another, readers who enjoy series books will likely prefer to begin their reading from the first book in the series.

My thanks to Kensington Books and NetGalley for providing me with an advanced copy of this book for review. The opinions expressed here are completely my own.