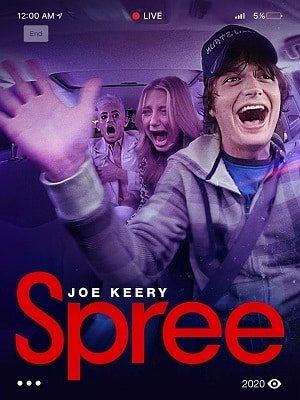 Spree is a 2020 American black comedy horror filmed predominantly on a phone camera, giving it a different sort of feel. The film received mixed reviews from critics, with most praising the film’s premise and the acting from Keery. I am inclined to agree with the critics on the whole.

The film premiered at Sundance Film Festival 24th January, 2020 before international release on Netflix in December 2020. Some news outlets believed the film to be the digital age’s answer to American Psycho, having some similar themes of murder.

However, Spree has nothing that stands out other than the performance from Keery. As always, we need to break down the film a bit more to see what made this film unique or how it looked at the current reality / state of the world for younger people.

The film centers around a young man, Kurt, who is desperate for online fame and for a legion of followers. He has posted on various social sites for around ten years without gaining any major growth in his channels. While waiting for this fame, he has completed various other types of jobs to earn money, such as babysitting and working for the ride sharing service Spree.

Kurt eventually comes with up a new content idea which he is calling #TheLesson, and begins to post videos on his channels about it, rigging his car up with multiple cameras so he can livestream the entire thing.

What is this idea? Kurt is killing his passengers.

While Kurt begins to kill his Spree passengers, he comes into contact with a social media comedian who, begins to make a laugh of him alongside the other passenger Mario. After Kurt has successfully murdered a few people in his car, his views have not improved, he seeks out his friend (and kid he once babysat) Bobby in the hopes that he will host the stream of Kurt committing these atrocities. But while there, Bobby begins to livestream also, calling Kurt names and degrading his behavior.

This is when the real fun begins.

The film is a social commentary on youth in search of social media recognition and desire for online fame. When you ask young kids in schools what they want to be in the future, more are saying Youtubers now than anything else.

When seeing Kurt and Bobby interact, you can easily see that Bobby wants to help Kurt, but not in the way he wants. Bobby believes Kurt should move on from his attempts at fame and subtly tries to steer Kurt this way, while also not wanting to share Kurt’s content. This is something that can be seen in current youth: the popular kids generally have a larger following and look down on those who have less than themselves. With most aspiring to be the ‘cool’ kids and become more noticeable, this is what makes the film interesting to the viewers.

END_OF_DOCUMENT_TOKEN_TO_BE_REPLACED

London detectives investigate crimes from the past