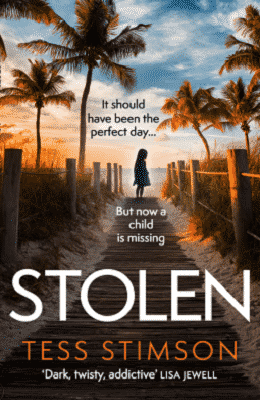 While you might think that the ‘missing child’ trope has become an overly popular theme in contemporary thrillers, this one puts an original spin on the story making for an interesting and engrossing read.

Lottie, the child who is missing, disappeared at a wedding in Florida. She had flown with her mother, Alex from London to be a flower girl at the beachside wedding of Alex’s good friend Marc. On the day itself Lottie was well behaved, performing her duties carefully in her little pink dress. After the wedding ceremony, the wedding party with a gaggle of tiny bridesmaids in pink dresses in tow, walked back across the beach to the reception at the hotel, followed by the wedding guests. Alex was sure she could see Lottie amongst the other little bridesmaids as they headed across the sand and again several times during the wedding buffet, and it was only later that she realised Lottie was missing.

Lottie is not the poster child for missing children, not in the least angelic in looks or nature, but a truculent, strong willed, overweight three-year-old, who is more than a handful for her mother. Alex had never had an easy relationship with her daughter, particularly since the death of her husband Luca who doted on Lottie. Left to bring up Lottie on her own, Alex has never thought of herself as a good mother. Busy juggling her career as a human rights lawyer she never seemed to have enough time, patience and energy left over to deal with a difficult child. When Lottie goes missing, it’s no wonder the police suspect Alex of being responsible in some way. Nevertheless, she loves her little girl with a vengeance and will do whatever it takes to find her. Eventually, with no new leads, Alex has to return to England, grief stricken but filled with determination to keep searching for Lottie for as long as it takes.

The novel paints a compelling picture of what it’s like to be the parent of a missing child who might never be found. In Alex’s case the pain, anguish and self-blame don’t diminish over time. Where some mothers will receive sympathy from the media, Alex will be judged for her less than perfect parental skills and for her behaviour at the wedding and subjected to more than her share of criticism by the press and social media. She will also be criticised for the time and money put into searching for Lottie, a white middle-class child, compared to the effort spent on missing children with darker skins from poorer homes.

For me, the ending of the novel was somewhat marred by an implausible and over-dramatic element in the climax, that seemed out of kilter with the rest of the plot and unnecessary for the resolution the author was seeking.  Nevertheless, overall this is a thoughtful, considered novel about the impact of missing children on mothers and families and how difficult it is to move on.

With thanks to Avon Books UK and Netgalley for a copy to read. Expected publication August 5, 2021.