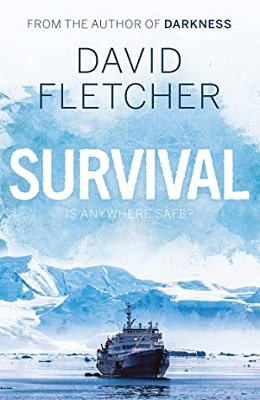 Alex and Debbie are an elderly couple, seemingly without children, that are taking the trip of a lifetime through Antarctica. They are excited to view the various islands and look at the Antarctic birds and mammal life. Neither are likable characters.

They observe at once that there are no fat people on this cruise and that is very acceptable to them. They choose their dining companions based on how smart they are and who can have an intelligent conversation, not open to the idea that all people have something to offer. Alex’s dinner companions believe that China is the “downfall of civilization.” While most of their conversations are thought provoking, there are many that are appalling, so we should know that this is not a politically correct book.

Stuart, a British intelligence officer, is stationed at a military base in the Falkland Islands. He is monitoring news reports every day and has been hoping for a transfer to the Caribbean, where it might be more exciting. But then he hears about an illness in China that is killing people almost instantly. But the news gets even more curious when it seems it has obliterated China from the Earth, completely wiped out. When his friend Gill presents him with an encrypted document that details the seriousness of the virus, they decide to abandon the Falkland Islands and set out on their own for survival. After a severe storm in the Antarctic, they are picked up by the cruise ship and taken in as deserters.  Once onboard, they inform Captain Jose of what they have learned. The captain decides that instead of heading back to Port, they will head towards Antarctica for safety, and raid empty stations along the way. They encounter hostility and danger from a few others along the way, including one where they encounter the deadly spores that are killing off the world.

An interesting fact about this book was that it was that the author actually wrote this before Covid, so there was no inclination that this would become a reality for a lot of cruise ships, stuck on board for months. Survival offers vivid descriptions of local wildlife; birds, seals, penguins. In fact, the only pleasant quality of our two protagonists, Alex and Debbie, is how much they loved the wildlife. It was increasingly difficult to care about them as their bigotry, fat-shaming and sense of superiority became clearer. My one wish for this book is that the author had made more likable characters so we could root for them. Clearly, David Fletcher has written an engaging novel about a virus that cycles out of control and changes the world, made even more enticing knowing that he did not know it would become reality.