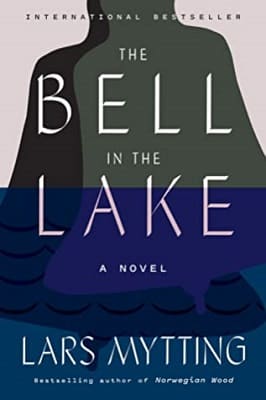 The Bell in the Lake

A seven-hundred-year-old stave church is being deconstructed in Norway. This is not just a wooden church, but an intricately built artefact with decoratively painted timber walls. Why would you risk the process of transporting this precious cargo to Germany?

Norway, 1880: In a secluded village of Butangen, young Astrid Henke dreams about a life beyond the valley and beyond conventional life. She already turned down two suitors, and now is viewed as restless and impossible to discipline.

The seven-hundred-year-old stave church in the village chimes with the bells donated by Astrid’s ancestors. The church has a new pastor, direct and unpatronizing, who wants to “stamp out all forms of superstition and folklore.” Christianity should lead to progress. By law, the church is too small and dilapidated. He wants to build “a functional church, a warm church, with four wood burners,” with big and easy to clean windows, “not like those bumpy glass panes high up on the walls.” Thus, he sends a grand proposal to Dresden to build a new, bigger church.

When the architect named Gerhard arrives from Dresden, he sketches the stave church, asks questions about missing dragon heads and a portal – a door frame. He was sent on this once in a lifetime project by his professor and was briefed about history of stave churches, of which Norway once had over 1000, now down to just 50. Artistry is being smashed across the country, and the architect is here to oversee the deconstruction of the church and later reconstruction of it in Germany.

The news announcing the fate of the church is not well-received. The sale of the church also includes the two bells and that upsets Astrid. And she hatches a plan how to save the Sister Bells.

The fate of the bells and deconstruction of the church keep readers in suspense. Deconstruction involves many aspects: careful attention to finely crafted joints so they are not damaged or the timbers split. Then everything needs to be entered “into logbook using an intricate system of numbers and letters,” then carefully stored until it’s ready to be shipped. The path that Astrid picks keeps a reader in suspense as well.

Descriptions of the place are magical, the history of the stave churches is spellbinding, and the depth of the historical background is breathtaking. The blend of the location, its people, customs, myths, their stave church, and the legendary church bells all come together like a fairytale, enchanted by the chime of the bells. And with the combination of the warm characters, together create a fascinating story.

The Bell in The Lake is a rare gem. It has a beautiful depth and interestingly developed characters. The compelling storyline is flawlessly woven with sharp prose and undeniable humor. Excellently balanced story with history and suspense makes it a seamless read.