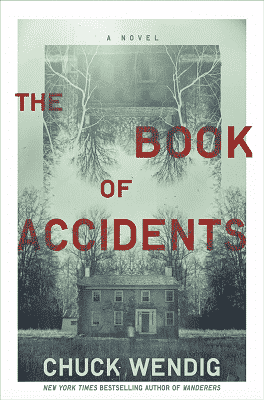 The Book of Accidents

A masterful exposition of literary horror melded with crime fiction and the supernatural. Wendig does not rely upon gore, but effortlessly paints from an unparalleled palate of prose to build an escalating sense of dread, foreboding, and suspense.

Immediately one of the pivotal characters is being clamped into the electric chair with scalp electrodes in place. Edmund Walker Reese is a serial killer of four young girls, and only caught when a fifth mysteriously escapes his clutches—aided by things and persons that shouldn’t be there. He is remorseless and insists the murders were necessary, as he perseverates on the importance of numbers. The executioner flips the switch only to have Edmund disappear in a “Poof,” leaving behind a char on the chair and the smell of funnel cake. Edmund’s killing grounds were in the notorious Ramble Rocks park with the adjacent tunnel from the old mine. It quickly became the site of “dares” at midnight.

The Graves family, consisting of Nate, his wife Mads and son, Oliver, are all flawed heroes in this tale of love, battling the overwhelming forces of abuse, alcoholism, bigotry and bullying.

Nate was a city cop in Philadelphia and a constant companion of the grittier side of life. Maddie was a sculptor and was consumed with the need to create things from discarded materials—with her innate abilities appearing in early childhood. Oliver, was indeed special, some considered strange. He “suffered” with empathy and appeared to actually perceive and feel the pain of others. Just fifteen and in therapy, allowing him to cope with this strange malady.

Nate’s abusive father is in hospice and dying from cancer. Seemingly fulfilling Nate’s wishes that he die slowly and painfully. His childhood was filled with dread and fear as his father, masquerading as a man, alternated between beating him and his mother. Usually while drunk. For some bizarre reason he was bequeathed his childhood home for the cost of a dollar. Although initially torn with the idea of returning to his childhood home, but at the urgings of both Maddie and Oliver he relents. It means a house and thirteen acres in a good school district and an escape from all their present day problems in the city. Mads could set up her own workshop—he would get a safer job at Fish and Game and Oliver would get a chance to start over in a nice, new school. Hopefully, he would find new friends.

The house was a stone colonial farmhouse, dating back to the 1700’s, with a red roof and a teal gable roof; the paint was fading and peeling; the walkway was crumbling and punctuated with an abundant selection of weeds. Nate saw the image of the house leaning forward with the red doorway gaping open, to engulf him and swallow him down in one gulp. This was a house of foul breath and bad dreams. Oliver quickly experiences intimidation and bullying, as well as some newfound friendships. Maddie seems to start experiencing fainting spells, even while creating her art with a chainsaw. However, her art in the form of an owl, seems to come alive and take flight. Meanwhile, Nate starts to see and hear people in his yard, including his dead father.

Ramble Rocks park and “The Tunnel” take center stage in the escalating dread and suspense as the Lenate and Early Quakers considered this as a “thin place,” meaning the barrier between worlds was the thinnest there. Not only were there numerous ghost sightings, but many people swore they saw themselves, or a version of themselves at this site. Even Edmund Reese thought it was a special place.

Wendig weaves a complex and twisted tale, touching on alternate dimensions and worlds and frequently evokes images right out of Lovecraft. He asserts that the world is constantly battling entropy;  countering school shootings, terrorism, bigotry, abuse and killing with ongoing love, birth and growth. Is the metaphorical demon here and winning? Often reality becomes blurred as Wendig ratchets up the tension and dread to almost unbearable limits. The explosive denouement is not expected, and yet welcomed.

Thanks to NetGalley and Random House Publishing/ Del Rey for providing an Uncorrected Proof in exchange for an honest review. Publication Date: July 20, 2021.